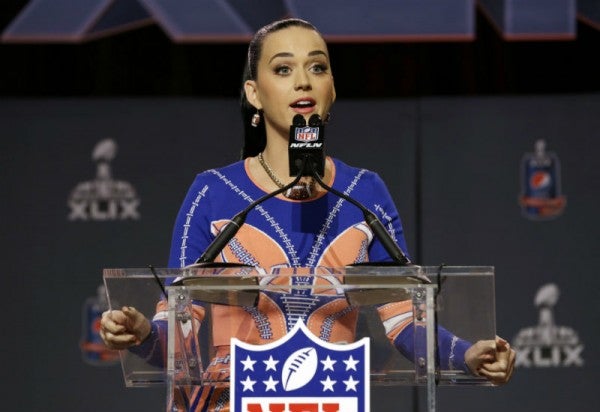 The singer told reporters at a press conference Thursday that her performance Sunday will include “a lion and sharks.”

“It’s going to be wild out there,” Perry teased.

Perry, 30, said she feels blessed to perform on the Super Bowl stage “at such a young age.” She said she enjoyed past Super Bowl performances from Beyoncé and Madonna, and what she adds “is some lightheartedness.”

Lenny Kravitz will join the pop star at the University of Phoenix Stadium in Arizona. Perry said her performance will also include an “old school” female singer who she declined to identify but said would be instantly familiar from the get-go.

“When you hear the first ring of the chord, I think jaws will drop and faces will melt,” she said.

She said the audience can expect to hear two of her hits, “Roar” and “Firework.” Her performance would be a visual feast in the tradition of Madonna and will celebrate “female empowerment,” she said.

Perry said one element of the show is the unfurling of a giant screen that will go on the field for visual effects, and she’ll also change her outfit several times.

She said the logistics of the performance will be difficult, and she plans to sing through much of it. “A lot of it will be live,” she said.

Perry, who’s in the midst of a world tour, said she’s been closely involved in planning the extravaganza. “There is not a diamond on the shoe that has not gone past my eyes,” she said.

“I feel that in some ways it’s a spiritual experience for me,” she said.

“I just hope that at the end of the day, over 100 million people are all smiling in unison,” Perry said.

Perry was playful with reporters, indulging one who wanted to take a selfie photo with her and shouting at a pair of puppets brought by a Mexican television crew.

While she was enthusiastic about talking about her show, when the topic turned to her love life, Perry channeled Seattle Seahawks running back Marshawn Lynch, who’s gained fame for refusing to answer reporters’ questions.

“I’m just here so I don’t get fined,” Perry said with a serious face. In true Lynch fashion, she repeated the line again.

Perry said she’s good friends with Seahawks quarterback Russell Wilson and will be rooting for the Seahawks on Sunday.

Perry said she’s taken health advice from Wilson, and her tour has her in good physical shape for Sunday’s performance.

“I think that we’re all athletes out there on the field,” she said. “We’re all very athletic in the show. We’re really prepared.”