Miss Jamaica Kaci Fennell does not have Filipino blood 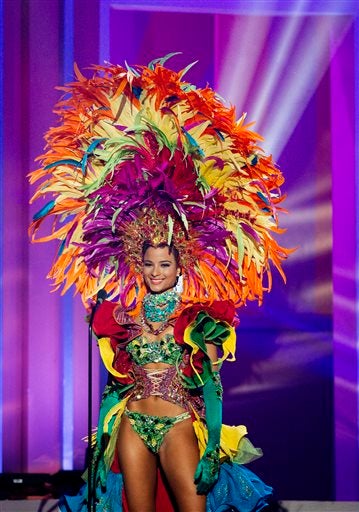 Sorry, but the answer is no.

Fennell herself denied that she has Filipino blood months before the Miss Universe 2014 was held in Doral City, Florida on Monday (Philippine time) where she placed fourth runner up.

In an interview with Jamaican media last September, Fennell clarified that her parents are both Jamaicans, contrary to recent reports stating that she has a Filipina mother.

She also warned people of relying on Wikipedia, citing the inaccuracies regarding her personal data on her Wikipedia page.

“Kids don’t use Wikipedia as a source of information. Listen to your teachers! First, one wrong thing, I was born in 1992. And then they started adding things like my mother is a beauty queen and she is Filipino. And I was like, ‘Oh, wow tell me more about Kaci Fennell. I want to know some more.’…My mother is Jamaican. Both from them (parents) came from mixed families,” she said.

Fennell has also denied the claim in an Instagram post dated August 11, 2014, saying that she has no Filipino roots.

An Instagram user named http.awesomest asked Fennell: “Hi @kacifenfen in wikipedia, it says that you have Jamaican, African and Filipino roots. Is it true that your mom is Filipino? Can you please confirm? Coz sometimes, Wiki is a bit too unreliable. Thank you!”

To which Fennell responded: “Thanks for bringing that to my attention. But I am a born and bred Jamaican with French, Indian, English and black roots. Both my parents are Jamaican as well.” 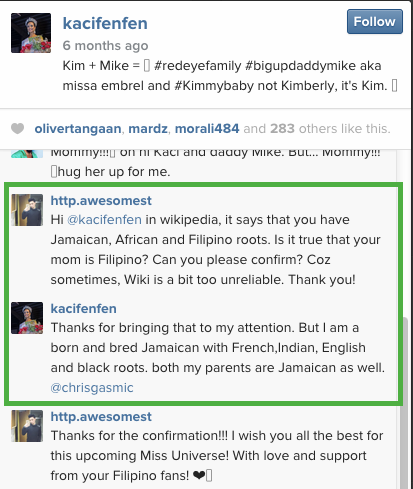 The word “Jamaica” even became the top trending topic in the Philippines hours after the beauty pageant’s coronation night ended.