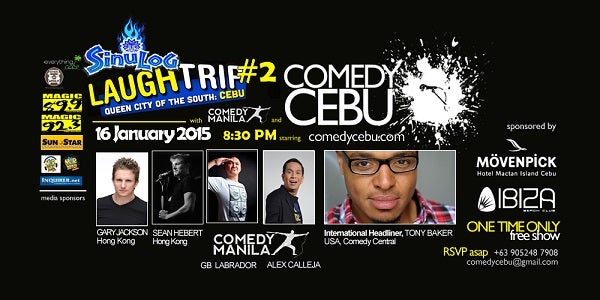 MANILA, Philippines—Comedy Cebu, a newly formed observational comedy group, is staging its debut show, hoping to spread the Pinoy Stand-Up Revolution that has already started in Manila, and to also take part in the celebration of this year’s Sinulog weekend.

The event, “Laugh Trip #2 Queen City of the South: Cebu,” a 90-minute live stand-up comedy show produced by Iris Montesclaros, will be featuring the best comedians, not only in the country, but also from around the world.

Jackson, a US citizen and Hong Kong resident, whose day job takes him around the Asia Pacific region, also happens to be an international stand-up comedian (from TakeOut Comedy HK) who has had the experience and privilege of performing regularly with different comedy groups in the Asia Pacific, Australia, South Africa, India and the US.

After witnessing first-hand the joyous and unforgettable festivities of Sinulog 2014, which is one of the many experiences about Cebu that reaffirmed his interest to make a home here in Cebu with girlfriend Iris Montesclaros, he brought up the possibility of helping cultivate the comic talent of Cebu to his “brothers” from Comedy Manila.

These comedians have gained experience in the international scene, having competed and won in comedy festivals locally and abroad. They do sets in both English and Filipino. More importantly, they aim to enrich the comedy appreciation and talent of Filipinos all over the country, which is why they have been bringing their performances to different parts of the country.

They practice point-of-view comedy which has been made popular by comic legends such as George Carlin, Louis CK, Ricky Gervais, Will Ferrell, Chris Rock and Fil-Ams Rex Navarette and Jo Koy, among others. This type of comedy, which makes use of anecdotal, life observation and perspective humor, is very different from the gay/pink/drag queen/insult comedy that is popular in mainstream comedy clubs here in the country.

Comedy Cebu does not only aim to bring seasoned stand-up comics from Manila and other countries to Cebu, but they are also intent on initiating the formation of a local observational comedy community to answer to the artistic and entertainment demands of the thriving Cebu population. Through time, Comedy Cebu also aims to help attract, scout and recruit interested and promising Cebu-based talents through their shows, headlined by the best stand-up comedians in the world no less, and through open mic nights and comedy competitions in the future. Comedy Cebu’s goal is to provide not only quality standup comedy entertainment to Cebu but also a productive avenue for aspiring comics of all ages, race/nationalities and gender orientations, who can deliver their sets using point-of-view comedy in Bisaya/Tagalog/English, to develop and showcase their talents.

Comedy Cebu has an official website, www.comedycebu.com, where the group posts their upcoming shows and announcements. They are also on Facebook, https://www.facebook.com/ComedyCebu, and as well as on Twitter and Instagram, using the @ComedyCebu handle. They can be reached through email at [email protected] for any inquiries.