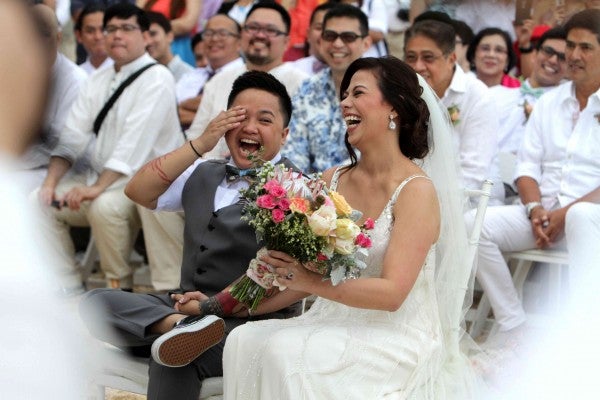 AIZA Seguerra (left) and Liza Diño get giggly at their “symbolic” wedding in Batangas on Thursday. INQSnap this page for more photos!

SAN JUAN, Batangas—The bride, actress and beauty titlist Liza Diño, was aware enough to call it “a symbolic ceremony” rather than a wedding rite, since same-sex marriage is still not legal in the Philippines.

But the giggles, tears and that final kiss were all heartfelt—as though Diño indeed got married to actress-singer Aiza Seguerra. The event, held in Kota Keluerga here in Laiya on Thursday afternoon, was witnessed by the bride’s parents, Martin Diño and Marissa Bautista, and the groom’s, Dick and Caring Seguerra, as well as over 500 relatives and friends. 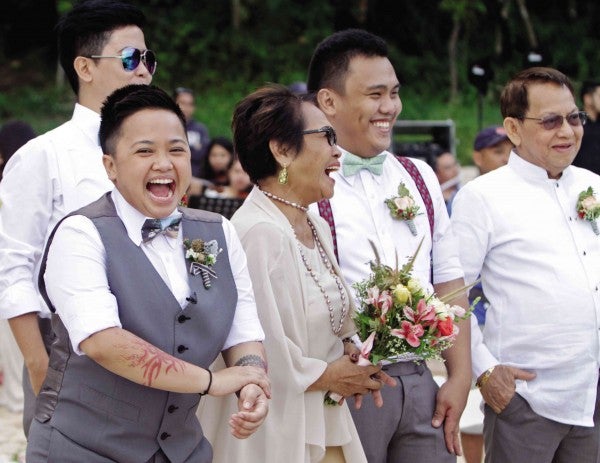 AIZA and her family (from right): Dad Dick, brother Juanchi and mom Caring

The couple was first married on Dec. 8 in San Francisco, California, where same-sex marriage was legalized in June 2008 (retracted in November that same year, and resumed in 2013).

“We’re doing this because we didn’t get to celebrate with our family,” Diño told the Inquirer a day before the ceremony. Their parents couldn’t attend the US wedding. “We originally planned to just do it before a judge in San Francisco, so we didn’t invite many people.” 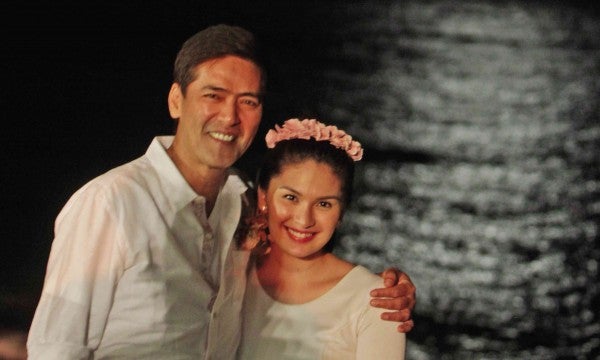 Walk down the aisle

Diño added, “I wanted to experience being walked down the aisle by my parents. Some people recommended the Metropolitan Church, but we never intended to make a statement out of this. We’re doing this just to express love for each other.” The Metropolitan Community Church in Makati is reputed to be the “spiritual home” for lesbians, gays, bisexuals and transgenders (LGBT) in the country.

At sundown on Thursday, Diño got her wish. Flanked by her parents, she marched to the “altar” on the beach, where Seguerra was waiting. Their long-time friend Carelle Mangliag was “wedding officiant.” 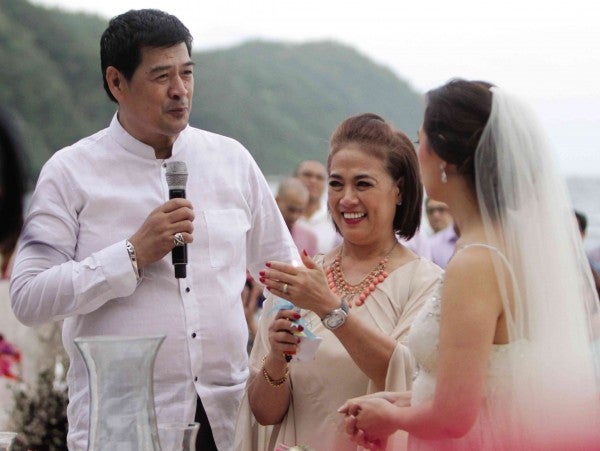 Mangliag is a motivational speaker and corporate trainer. She was “ordained” online, she said, adding, “That does not have any legal [bearing] here in the Philippines [but] according to the terms of my ordination, it is legitimate in the United States.”

The ceremony included traditional wedding features. However, instead of a Holy Gospel reading, there was a talk about union and marriage.

There was an exchange of vows and rings. The couple lit the same “unity candle” they used in the US wedding but, this time, along with their parents. And the vows were different.

“You have no idea how happy you’ve made me,” Seguerra told the bride. “I feel different when we’re together; I’m so alive. To me, you’re perfect even though you’re so messy and forgetful at times. You just think I’m angry at you [sometimes]; actually, I find you so adorable. If there’s one person who will love you and accept you for who you are, especially the bad [side], it’s me. Don’t be afraid. Whatever happens, I will be here.” 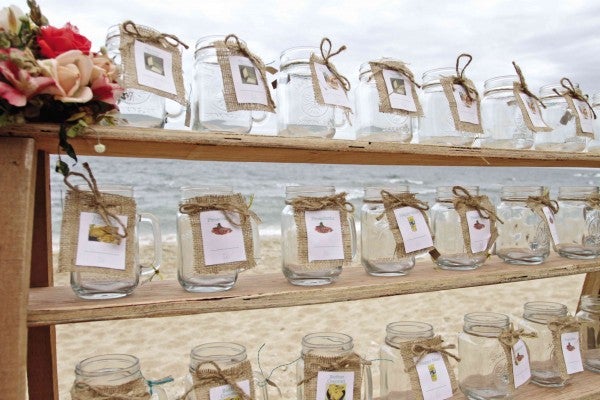 And then it was Diño’s turn: “I’m glad that I will be spending the rest of my life with you. I love everything about you, even though in some places we’ve traveled to, people mistook you for my child. I’ve [come] to accept that. As you continue to discover yourself as a person, trust that I will be there to embrace you, to support you 100 percent.”

Diño’s gown was made by British designer Jenny Packham, who created the popular midnight-blue dress of Kate Middleton, Duchess of Cambridge. Diño’s is a teal number that she found was “perfect for the beach scene, since it’s more relaxed and flowing.”

In the US ceremony, she donned a white Monique Lhuillier gown, “lacy and appropriate for the vintage theme.” 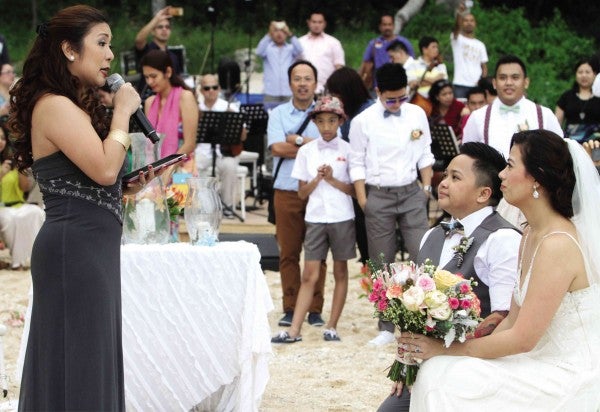 INSTEAD of a Holy Gospel reading, a talk about marriage and commitment

Seguerra wore a gray-and-white piece from Oscar Danca, master cutter for Bergamo, who also made her suit for the US event. “The first one was tweed (three-piece gray suit and white shirt),” Danca said. “This one’s more relaxed and lighter in color.” Danca outfitted Seguerra’s entourage as well.

Dominant colors at the beach gathering were mint green, peach, khaki and light gray. Guests were discouraged from wearing black. Diño described the scene as “very festive and laid-back.” 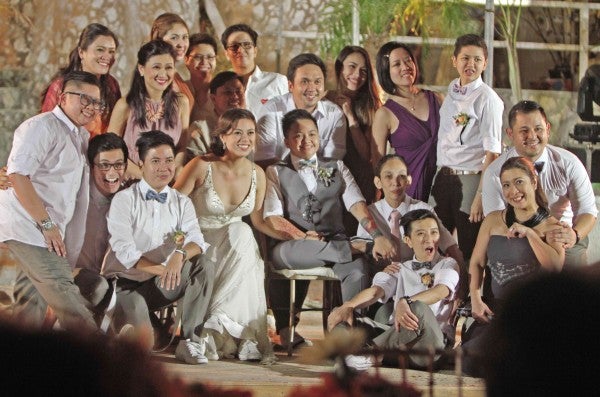 PHOTO-OP WITH FRIENDS Liza’s gown is by British designer Jenny Packham, who created the popular midnight-blue dress of Kate Middleton, Duchess of Cambridge. 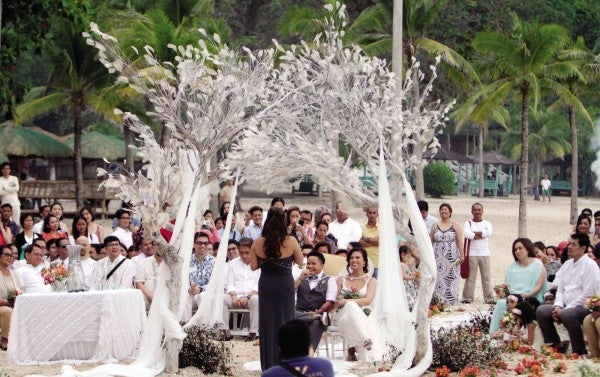 SOME 500 friends and relatives turned up for the late-afternoon, beach-side ceremony. Photos by Kimberly de la Cruz

The wedding’s effect on the local LGBT community, Diño said, would at best be incidental. “We’re receiving good feedback from a lot of people, saying they are inspired by what we’re doing,” she said. “We consider ourselves advocates because we’re standing by what we believe in.” 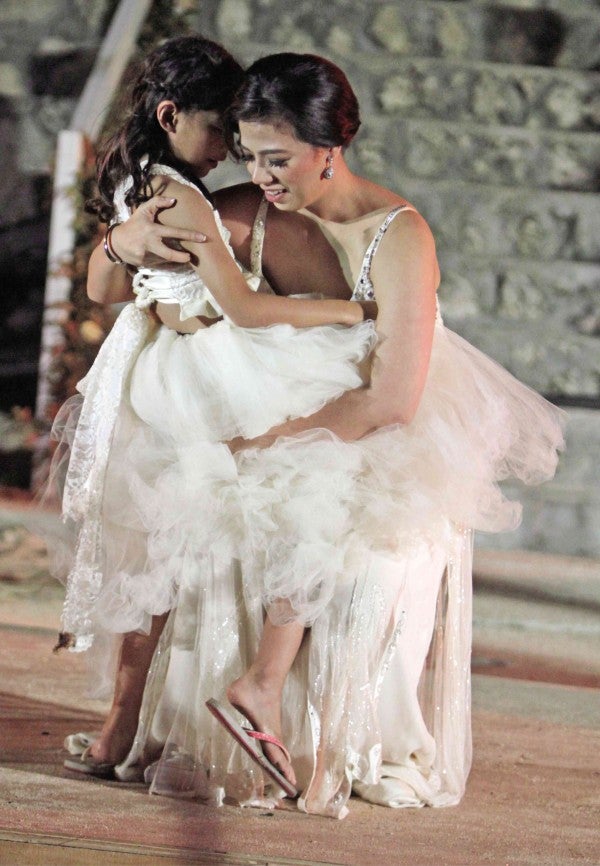 She continued: “We’re happy where we’re at. We respect other people’s opinions and understand that not everyone is ready to accept something like this. We went through a lot to make this happen. I sought divorce in the United States for my previous marriage. Aiza and I had all bases covered. This is the culmination of that long process.” 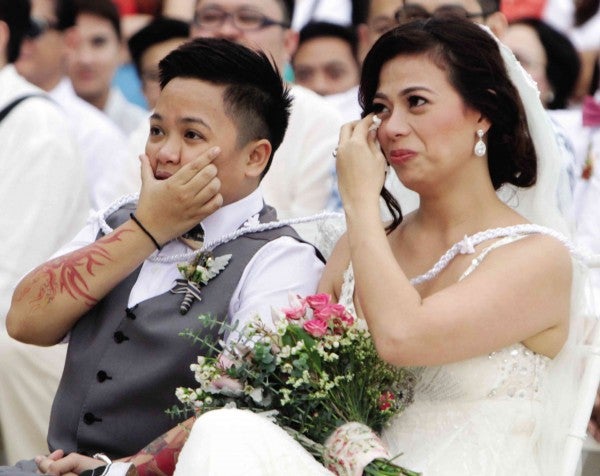 THE COUPLE tears up during the ceremony.

Noted LGBT rights advocate Anna Leah Sarabia stressed, “This is a personal thing between them; people should not meddle.”

Sarabia is a sociologist and women and media expert. She is with the International Lesbian, Gay, Bisexual, Trans and Intersex Association’s women’s secretariat in the Philippines. She is the author of “Tibok,” the first lesbian book in the country. 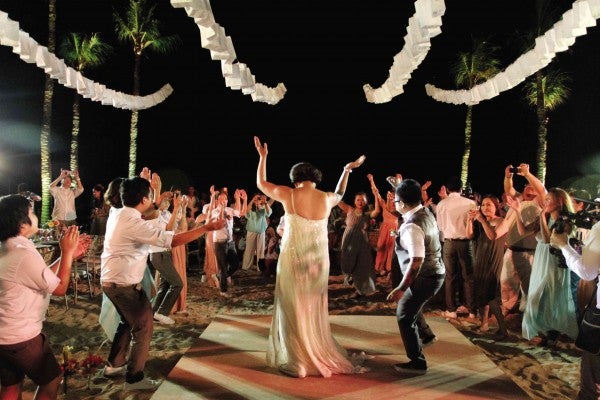 Asked how she thought the wedding would impact the local LGBT community, Sarabia said, “Visibility is good because it makes [gay] people come out of hiding. This, specially, takes a lot of courage. Look what happened to [American TV host] Ellen DeGeneres. She couldn’t find work for five to eight years [after admitting, in 1997, that she was a lesbian]. Fortunately, she decided to say, ‘Who cares?’ because she is extremely talented. Aiza is like that.” 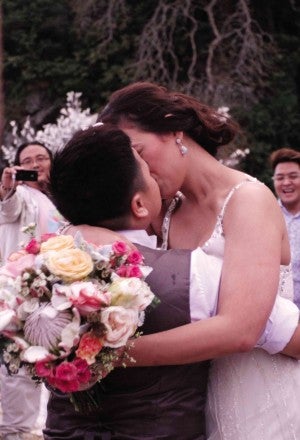 SEALING it with a kiss

Sarabia said she met Seguerra when she produced a show that the latter hosted for the Knowledge Channel in 2005. “Body Talk,” a program that focused on teenagers and reproductive health, aired until 2007. “She was very young, but quite well-known. I used to see her a lot. We talked about many things.” 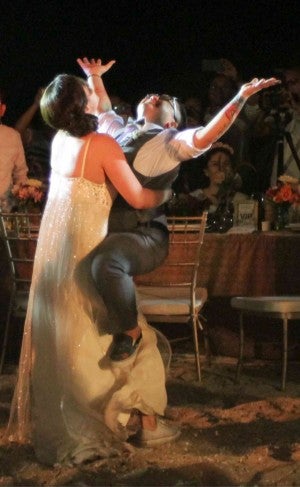 “YOU don’t know how happy you’ve made me,” Aiza told the bride during the exchange of vows.

She “somehow felt responsible” for Seguerra, Sarabia said. “I consider myself among 100 people who mentored her. I hope she finds herself, and happiness. I’m glad that Liza is not the typical lesbian-looking partner. They’re both extremely talented. I hope their partnership blooms and that they continue to inspire each other to do better.”

As to Seguerra and Diño being torchbearers for the LGBT, Sarabia said, “It’s their decision. It should not be imposed on them just because they’re celebrities. Coming out and getting married are [a lot]. That’s enough; let’s let them be.”

Diño said the best part is that her daughter is happy. “Amara can’t wait to move into our new home. She was very involved in organizing this ceremony. We have a harmonious relationship with her father; we’ve not heard anything negative from him.”

Amara used to call Aiza “Baba”; now it’s “Dad,” said Diño. “This is a great new experience for us.”