Bill Cosby returns to stage for 1st time since November 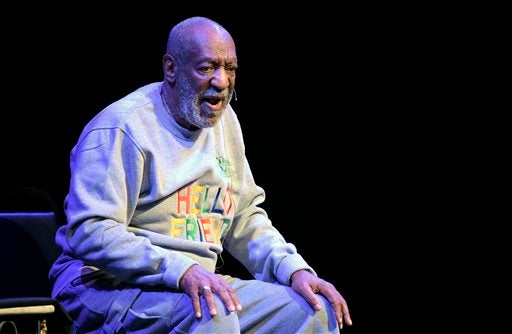 In this Nov. 21, 2014 file photo, Bill Cosby performs during a show at the Maxwell C. King Center for the Performing Arts in Melbourne, Fla. The scandal-plagued comedaian returns to the stage Wednesday, Jan. 7, 2015 for the first time since November with some planning protests, others vowing not to show up and others still saying they will heckle the comedian in Canada. AP

TORONTO — A scandal-plagued Bill Cosby returns to the stage Wednesday night for the first time since November and his reception is certain to be mixed, with some planning protests, others vowing not to show up and still others saying they will heckle the comedian.

The three performances in Canada follow sexual assault allegations by more than 15 women and come after Cosby saw at least 10 performances get canceled on his North American tour.

The 77-year-old comedian is scheduled to appear at the Centre in the Square in Kitchener, Ontario, on Wednesday; at the Budweiser Gardens in London, Ontario, on Thursday; and at the Hamilton Place Theatre in Hamilton, Ontario, on Friday.

“I don’t know how people in good conscience can go and enjoy the show,” said Maureen Dragasevich.

Dragasevich, 59, said she and her family bought tickets and were once huge fans, but they’re not going now.

Since November, at least 15 women have come forward with claims Cosby sexually assaulted them decades ago. Most of the women say he drugged them before he assaulted them.

Cosby, who starred as Dr. Cliff Huxtable on “The Cosby Show” from 1984 to 1992, earning a reputation as “America’s Dad,” has never been charged in connection with any of the allegations, and through his representatives he has denied them. A 2005 lawsuit by a Pennsylvania woman was settled before it went to trial.

Cosby’s career unraveled after his accusers came forward, with a TV project halted and at least 10 standup comedy tour performances canceled or indefinitely postponed. The show in Kitchener will be his first show since Nov. 21 in Melbourne, Florida, where Cosby was greeted by an adoring audience that laughed so hard they slapped their knees, shouted love at the stage and rose to their feet as he came and went. Protesters didn’t show and there were no hecklers.

Not so in Canada, where protests are planned. Megan Walker, executive director of the London Abused Women’s Centre, said there will be a demonstration outside the London venue, and was told some ticket holders who couldn’t get a refund will heckle Cosby instead.

Kitchener’s mayor, Berry Vrbanovic, said he will attend an alternative event that was organized to raise awareness of sexual assault at the same time as Cosby’s show.

London Mayor Matt Brown said the promoter should consider canceling the London show and Ontario Premier Kathleen Wynne said she wouldn’t attend any of Cosby’s shows in the province because of the “very serious” allegations.

“Until those are sorted out I certainly would not go to a performance,” Wynne said.

Cosby’s promoter, Adam Epstein of Chicago-based Innovation Arts & Entertainment, said he is legally obligated to move ahead with the shows in Canada, and said it would send the wrong message to other artists if he canceled.

“If the allegations are true, of course I find them abhorrent, but at the same time at this point I find it presumptuous for anyone to expect me to take action and break an agreement with another business client at this stage,” Epstein said. “What if it is not true? If there’s an indictment and conviction that’s one thing.”

Scott Warren, the general manager of the Hamilton Place Theatre, said the theater is bound by a contract with the promoter and would risk being sued if the show were canceled.

Don Jones, who has promoted Cosby shows in London previously, estimated the promoter is on the hook for half a million dollars for the three shows.

“That’s a lot of money to lose if you decide to cancel. He’s caught between a rock and a hard place,” Jones said. “To be honest I’m amazed Cosby hasn’t canceled just for the embarrassment part of it.”

But Jones said Cosby probably has his reasons.

“He’s 77 years old. I’ve heard that there’s about 17 shows left in the schedule. I’m sure he realizes that it’s over. I can’t imagine any venue buying a Cosby show in the future,” Jones said.