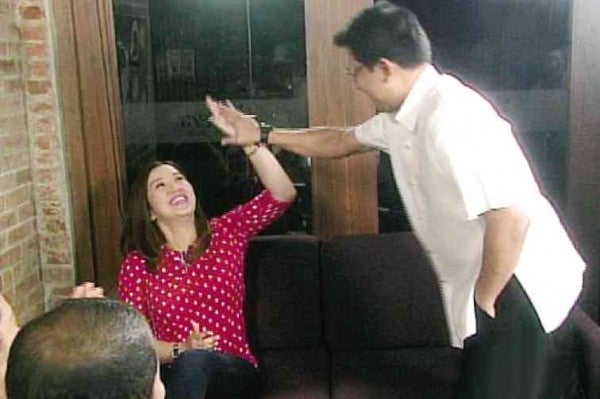 MANILA, Philippines—After reconciling with estranged friend Ai Ai de las Alas, Kris Aquino has also made peace with another person who became close to her heart in the past year.

On the January 6 episode of her talk show “Aquino and Abunda Tonight,” Kris Aquino said ex-boyfriend Mayor Herbert Bautista went to her house shortly before the New Year to make amends to her and end the year on a good note.

The night before she was to attend the wedding of stars Dingdong Dantes and Marian Rivera, Aquino said the Quezon City mayor visited her at home. She said “personal nyang ginustong tapusin ang taon na OK kami, na friends kami (Bautista personally wanted to end the year with us being on good terms, as friends).”

Aquino said Bautista’s gesture was what inspired her to try to be friends with De las Alas again. “I appreciated his (Bautista’s) gesture; maybe Ai Ai would have the same reaction as mine if I do the same to her,” Aquino said.

“I felt so good that (Bautista) gave me the importance to see me,” Aquino said, adding she wanted De las Alas to feel the same toward her.

Aquino and Bautista had a short-lived relationship last year. In April, Aquino admitted in her talk show that she and Bautista were dating. A couple of months later, Bautista said in another TV interview that their relationship did not work out because of the conflict it had with his children.

Aquino responded later that month to Bautista by saying “true love graciously lets go.” She also said she wished him good things and hoped they could be friends again.

Kris Aquino: ‘I was ready for Ai Ai to snub me’