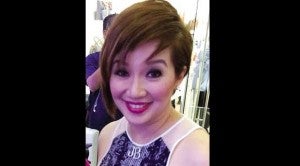 Discussing serious matters such as death penalty, politics and a controversial slapping incident, the two looked chummy with each other on Monday’s episode of Aquino and Abunda Tonight.

On the show, Bautista explained why he slapped a suspected drug pusher on Friday and apologized for the act, which was caught on video.

“I apologize to the public, (Commission on Human Rights) Chairperson Etta Rosales, and especially to the youth. ‘Di ‘ata tama kung magiging leader sila in the future, tapos sasabihin nila, ‘Bakit si Mayor Bistek, no’ng leader siya, ginagawa niya ’to?’ (It is not right that when they [youths] become leaders in the future they will say, ‘Why was Mayor Bistek able to do this when he was still a leader?’),” Bautista said.

The interview was rather intimate, candid and awkward with only Kris doing the job. Aquino’s co-host, Boy Abunda, who was sick.

In April, Aquino confirmed that she and Bautista were going out. Early in June, however, Bautista confessed during a live TV interview that their relationship did not work out because he loves his children.

Aquino has publicly admitted that she was hurt by Bautista’s confession.

In her own public statement late June, Aquino recounted her happy memories with Bautista, but said that “true love graciously lets go.” She also said that she hoped she and Bautista could be friends.

During Monday’s interview, the presidential sister repeatedly said that she and the Quezon City Mayor were now mere friends.