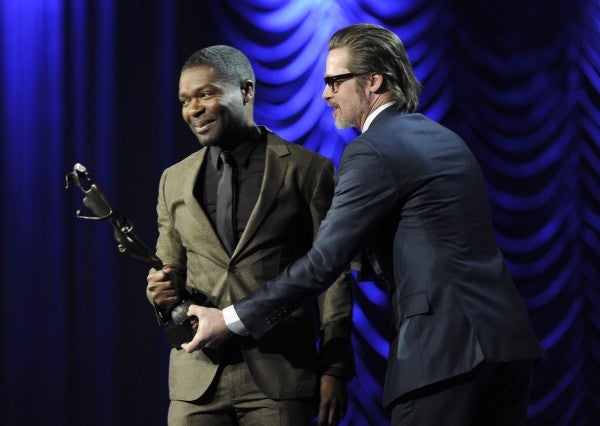 PALM SPRINGS, California — The first star-studded film-award ceremony of the new year was literally something to sing about.

While not an honoree himself, actor-producer Brad Pitt stole the spotlight with a sing-along for a few moments Saturday night at the annual black-tie gala for the Palm Springs International Film Festival.

Pitt traveled some 100 miles (160 kilometers) east of Los Angeles to the desert town of Palm Springs, California, to introduce British actor David Oyelowo, an honoree at the gala whose profile is only now on the rise in the U.S.

In his introduction, Pitt professed his admiration for Oyelowo — both as a colleague and friend — and, at one point, Pitt led the audience in a sing-along with lyrics spinning around Oyelowo’s often-mispronounced last name. (It sounds like “oh-yellow-oh,” by the way.)

The gala, which attracts numerous locally based Academy voters who now have ballots in hand, traditionally is the first of each calendar year’s award-season ceremonies, which include approximately two-dozen events significant enough to attract major movie stars between now and the Oscars, set for Feb. 22 in Hollywood.

“This is the first time I am a part of (the two-month award season),” said Morton Tyldum, director of the Golden Globe-nominated drama “The Imitation Game” earlier in the evening while doing red carpet interviews. “When I saw the schedule,” Tyldum continued, “I was in shock,”

Not so award-season veteran and Palm Springs honoree Reese Witherspoon (“Wild”), who said, “It’s a great opportunity for all of us to get together and celebrate this wonderful year of film.”

The actress, an Oscar winner for “Walk the Line” (2005), said, “Wonderful performances, wonderful direction and producing. And I feel like it has been a real great, strong year.”

At points, love was in the air on the red carpet, as festival honoree Eddie Redmayne (“The Theory of Everything”) posed for photographers with his new wife, public-relations executive Hannah Bagshawe, and “Imitation” star Benedict Cumberbatch, briefly stopped for a few snaps with his fiancee, theater director Sophie Hunter.

Oyelowo actually did two photo sessions: one with wife, actress Jessica Oyelowo, and three of their four children. The actor returned to pose for photos with DuVernay.

Both Oyelowo and DuVernay are nominated for Golden Globe awards, to be handed out next weekend in Beverly Hills.

Brad Pitt, life after the wedding