MANILA, Philippines—President Benigno Aquino III on Sunday got candid in a taped episode of the talk show “Gandang Gabi Vice,” opening up about his work and personal life.

The show, which was taped two weeks ago, got Aquino talking about embattled “friends” Vice President Jejomar Binay and suspended Philippine National Police chief Director General Alan Purisima, among others.

During a fast talk session where host Vice Ganda asked him to concisely describe the people whose photos were shown on screen, Aquino continued to defend the suspended PNP chief, insisting that he was not a bad cop. 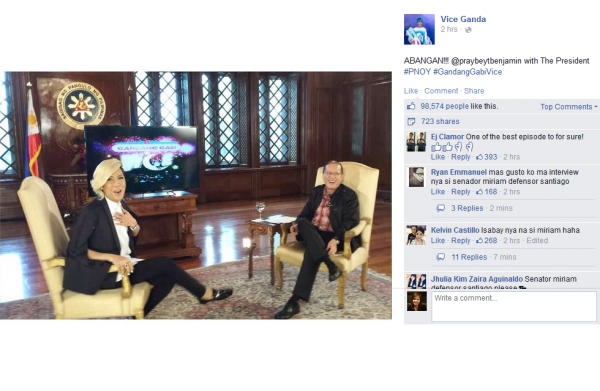 “’Yung ’pag may imahen tayong negatibo sa kapulisan, hindi ’yon ang pagkakilala ko sa tao ni Alan. Ang dami niyang hinuhuli at wala siyang sinasanto. Marami siyang kabaro na ngayo’y humaharap sa pagkakasakdal o nakukulong na mali ang ginawa (If we have this negative image of the police force, that is not how I know Alan. He has arrested so many and spares no one. Many of his colleagues who have done wrong are now facing trial or are in jail,” Aquino said.

Purisima was ordered suspended by the Office of the Ombudsman for allegedly brokering a purportedly anomalous contract with a courier company.

He also said he has known Binay since the martial law.

Aquino also recalled his experiences as a student of former President and now detained Pampanga Representative Gloria Macapagal-Arroyo. He called her a “knowledgeable” professor.

While he was interviewing the most powerful man in the land, comedian Vice Ganda did not quite hold back on his jokes and quips.

Aside from sharing a joke he got from a forwarded text message and giving a sample of his karaoke staple “Estudyante Blues,” Aquino also talked about host Grace Lee and stylist Liz Uy–two women previously linked to him. He described the two as “successful.”

He admitted that he was in a relationship that ended several months ago. He also said that he prefers being with a younger woman.

“Para naman puwede pa kami magkaanak, (so we can still have kids),” he said.

He also said that kids help him get rid of stress, sharing stories about how he appreciates kids who would just hug him.

A “sensitive” topic that came up repeatedly during the interview was the President’s thinning hair.

He said that his genes which he got from the Cojuangco family may have been responsible for it.

#PNoyOnGGV was a top trending topic on Twitter on Sunday night. While some netizens appreciated the President’s candid side, others scoffed at Aquino’s choice to do the interview instead of attending to other, more important matters.