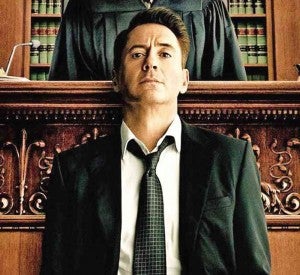 Set in April 1945 during the Allies’ month-long final offensive into Nazi Germany, “Fury” pushes viewers to the edge of their seats as army Sergeant Don “Wardaddy” Collier (Pitt) leads his outnumbered and outgunned five-man crew in a busted Sherman tank on a do-or-die mission to protect a vital crossing while 300 blood-thirsty German soldiers approach!

That nerve-wracking sequence in itself is worth the price of admission, but the provocative scenes that precede it—where the bond between the battle-hardened soldier and his wet-behind-the-ears new recruit, Private Norman Ellison (Lerman), is skillfully and movingly established—will win you over long before the film heads for its cinematic homerun.

Just when you think Hollywood has run out of original stories about the senselessness of war comes a far-from-perfunctory war drama with a fresh perspective: Plucked out of the typing pool, Norman’s training is limited to typing 60 words per minute, so he’d rather get shot at than blow enemies’ heads off.

To bring Norman up to speed on the harsh realities of war, Don forces the newcomer to shoot a captive German soldier in the head—but, the shaken young man refuses and screams, “Is this supposed to make a man out of me?” The sergeant’s quick reply: “Ideals are peaceful, but history is violent!”

Ayer conjures up haunting images that will have you squirming in your seat (like tanks rolling over “casualties of war”) and boldly stages claustrophobic sequences with brutal pertinence, especially during Pitt and Lerman’s tension-filled meeting with two German women. It demonstrates how Solomonic dilemmas bring out the best—and worst—in all of us! 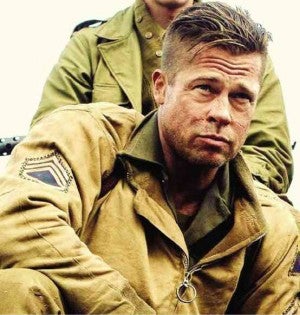 For its part, “The Judge” is marred by predictable melodramatic missteps—but, it deserves to be seen because it gives Robert Downey Jr. much-needed “breathing space” from his financially lucrative actioners, and allows him to revisit his dramatic roots. Downey, in a tailor-made role that plays well to his strengths and vulnerability, doesn’t disappoint, especially in his explosive confrontations with Robert Duvall, who portrays his disapproving father, Judge Joseph Palmer.

David Dobkin’s Grisham-style courtroom procedurals put Downey through the dramatic wringer as Hank Palmer, a cocky Chicago defense attorney (“I always represent the guilty, because innocent people can’t afford me”), who grudgingly returns to his hometown in Indiana when his mother dies—only to find out that he must defend his dad, who’s accused of running over a remorseless murderer he was once forced to acquit! Is he guilty, as the evidence suggests?

With Downey, Duvall and Vera Farmiga (as Hank’s former college sweetheart) providing thespic tension, the production shuttles between domestic drama and legal thriller, but Downey’s sleek but thoughtful portrayal generates sufficient dramatic heat by meshing the two genres into coherence. The film has its share of imperfections—but, its heart is in the right place!