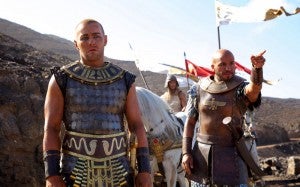 RABAT, Morocco – Morocco banned biblical epic “Exodus: Gods and Kings” on the flight of the Jews from ancient Egypt because it “represents God” which is forbidden under Islam, its distributor said Saturday.

The distributor said it had received written notice that Ridley Scott’s blockbuster contained a scene that represents God in the form of a “child who gives a revelation to the prophet Moses”.

Initially, cinema owners were informed verbally that the film had been banned, media reports had said.

“I deplore this censorship,” distributor Mounia Layadi Benkirane said in a statement to AFP.

Moroccan media on Thursday reported that cinema managers had been told not to screen the film, despite its release already having been approved by the state-run Moroccan Cinema Center (MCC).

Hassan Belkady, who runs Cinema Rif in Casablanca, told media24 news website that he had been threatened with the closure of his business if he ignored the ban.

“They phoned and threatened they would shut down the theater if I did not take the film off the schedule,” Belkady said.

Distributor Benkirane, who also runs the Colisseum cinema in Marrakesh, said “Exodus” has now been pulled from the schedules.

“The last screening was on Friday night at 21:30. I respect the decision of the MCC board,” she said, but added that she did not understand why the decision was taken.

“The child through whom Moses receives the revelation in the film at no time says he is God,” she said, noting that such a film ban is “very rare” in the North African country.

Neither the head of the MCC nor the communications ministry could be immediately contacted by AFP to comment on the issue.

Benkirane said the film could have resulted in 35,000 ticket sales in Morocco and earned 1.8 million dirhams (nearly 160,000 euros).

Now the buzz caused by the controversy “will profit only the pirates who continue to peddle the film”, she said.

The 3D “Exodus: Gods and Kings”, starring Christian Bale as Moses rising up against the Pharaoh Ramses, earned $24.1 million in its debut weekend in the United States, according to box office tracker Exhibitor Relations.