MANILA, Philippines – What better way is there to announce your upcoming wedding than with a music video?

So, that’s exactly what singer Yeng Constantino and her fiancé, Victor Asuncion, did.

The pair released their “prenup video” as the official music video of Constantino’s single “What’s Up Ahead.”

Posted on the Youtube account of Nice Print Channel on Friday, the video had been viewed more than 72,000 times as of Sunday morning. It premiered on the music channel Myx. 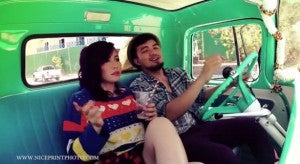 The 3-minute video starts with the two packing clothes onboard a vintage Chevy pickup truck.

Asuncion, a former band member and worship director at the Victory Christian Fellowship, sings the first line of the song, “I feel like I can do anything when you are by my side.”

The lovebirds are then seen driving around in the green truck with the latter part of the video showing them dancing and acting goofy.

The laid-back song banks on the catchy chorus, “What’s up ahead is what we’re waiting for. I guess it’s you that I was looking for. Today’s the day that I’ve been living for” – fitting lyrics for the soon-to-be husband and wife.

Asuncion, the singer’s first boyfriend, proposed in March. Their wedding will be in Tagaytay on February 14 next year.