Coleen: Billy is the perfect partner 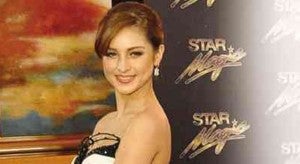 Coleen Garcia says a relationship is all about work and commitment. photo by richard reyes

“I’ll stand by his side because that’s what partners do,” said Coleen Garcia in defense of her boyfriend Billy Crawford. The actress-TV host reacted to comments saying Billy, who is 10 years her senior, was just not right for her.

“He inspires me, really motivates me to be the best person I can be,” Coleen told writers during a media gathering for her debut film “#Y.”

She recalled a conversation she had with her mom about Billy during the early phase of their relationship.

“She asked if I was sure it’s worth it. I said it’s not easy to be with me, any more than it is easy to be with him. Whatever problems he is experiencing outside our relationship, I had nothing to do with.”

Coleen was referring to the recent incident where Billy was charged with malicious mischief and disobedience after reportedly making a scene while drunk in a Taguig City community precinct in September.

Coleen insisted that “Billy has been a very good boyfriend, so far. He’s a very caring partner to me. Everything that I am looking for in a guy, I found in him. I’m not saying he’s already perfect, I just feel that he’s the perfect partner for me.”

The host of “It’s Showtime” added: “I know that whatever happens, he will support me and will never pull me down. He’s very honest to me. I feel like I’ve found not just a partner, but also a friend whom I can share all of my problems with and who will always understand me.”

She added: “I wouldn’t be with someone unless I believe that this person is really the one for me. A relationship is all about work and commitment. When your relationship is tested, that’s when you see how much you love each other.”

Coleen said Billy was very supportive of her, especially when she worked on her first film. “When he watched it for the first time, he was so happy. I felt so nervous the whole time because I didn’t really know if I did well. I was afraid he’d say my character was too revealing. He has always been very protective of me. When I saw that he liked it, I felt more relaxed,” she said.

Coleen will be part of the local adaptation of the Colombian series “Pasion de Amor.” She will also be seen in another Gino Santos film to be produced by Star Cinema.

Coleen recalled her experience working on her first film project. “Gino has been my friend since I was 10. He’s a visionary. He has a very creative mind. From the start, I felt comfortable working with him. However, I still went through the whole audition process. Working on the set was a breeze, not only because of Gino but also because of everybody. We are, more or less, of the same age.”

The film, which is distributed by Star Cinema, is currently being shown in theaters nationwide.