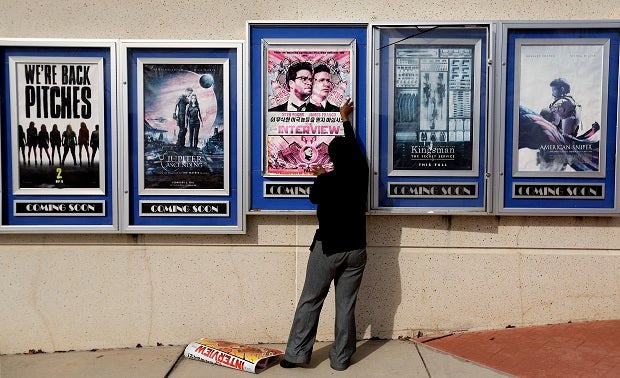 NEW YORK — Sony Pictures has canceled the Dec. 25 release of “The Interview” after hackers threatened terrorist attacks and the largest multiplex chains in North America pulled the film from its screens.

In a statement Wednesday, Sony said it was cancelling “The Interview” release “in light of the decision by the majority of our exhibitors not to show the film.” The studio, which has been shaken by hacker leaks over the past several weeks, said it respected and shared in the exhibitors’ concerns.

“We are deeply saddened at this brazen effort to suppress the distribution of a movie, and in the process do damage to our company, our employees, and the American public,” read the statement. “We stand by our filmmakers and their right to free expression and are extremely disappointed by this outcome.”

Earlier Wednesday, Regal Cinemas, AMC Entertainment and Cinemark Theatres — the three top theater chains in North America — announced that they were postponing any showings of “The Interview,” a comedy about a TV host (James Franco) and producer (Seth Rogen) tasked by the CIA to assassinate North Korea leader Kim Jung-un (played by Randall Park).

Regal said in a statement that it was delaying “The Interview” ”due to wavering support of the film … by Sony Pictures, as well as the ambiguous nature of any real or perceived security threats.”

Sony had offered theaters the option of bowing out, and when so many of them did (other chains included ArcLight Cinemas, Cineplex Entertainment and Carmike Cinemas), it left Sony little choice for the release of “The Interview.”

The seriousness of the threat made Tuesday in messages posted online by the hacking group that calls itself Guardians of the Peace, is unclear. The Department of Homeland Security said Tuesday there was “no credible intelligence to indicate an active plot against movie theaters,” but noted it was still analyzing messages from the group. The warning did prompt law enforcement in New York and Los Angeles to address measures to ramp up security.

The FBI is investigating the identity of the hackers, but suspicion has centered on North Korea, which previously issued warnings over “The Interview.”

Sony did not say what its plans for “The Interview” now are, or whether the film’s release could potentially happen at a later date. Conjecture has centered on the possibility of an unprecedented on-demand release that would distribute the film without risk to theater operators. No wide-release studio film has ever been first released on VOD, out of protection of the theater business.