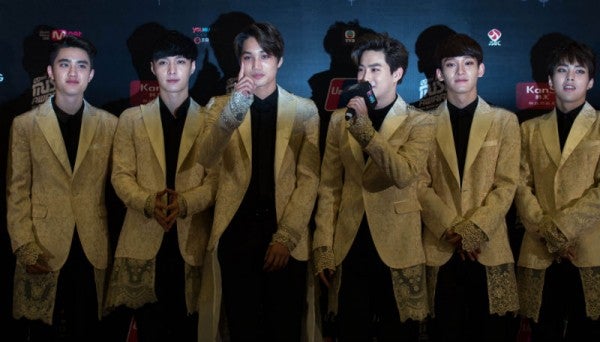 HONG KONG, China — Thousands of screaming fans were treated to sexy dance acts and performances by stars including John Legend in Hong Kong on Thursday at one of the biggest events on the K-pop calendar.

US singer Legend was awarded the “International Favorite Artist” award and performed a moving rendition of hit single “All of Me” at the K-pop-heavy Mnet Asian Music Awards (MAMA).

“I come from a small town in Ohio and I always dreamed that I would be able to make music for a living,” the 35-year-old nine-time Grammy winner told cheering fans at the packed World-Expo arena.

“But I never dreamed that it would take me so many places and I’m so happy that I have fans in Asia who really love my music.”

Legend, who also performed his hit “Green Light”, shared the stage with Cantopop stalwart Eason Chan and an array of South Korean stars including Ailee and SISTAR.

An electric performance by Ailee and Girl’s Day kicked off a ceremony that saw South Korean-Chinese heartthrobs EXO win big, taking album of the year for “Overdose” as well as being named best male group and Asian artists of the year.

Park Chan-Yeol, one of the boy band’s ten members, said 2014 was “a very hard year for EXO” after two of its Chinese singers filed lawsuits against their record label in a bid to end their contracts.

“Thank you to everyone that helped the band,” Park told fans.

SISTAR were named best female group, while 21-year-old Korean songstress IU — a MAMA debutante — took the gongs for best female artist and most popular vocalist for 2014.

“I sang a lot of songs this year, and I want to thank all the people who helped me to feel that singing was fun,” she said.

Taeyang, who made his debut with K-pop boy band Big Bang, won best male artist for his solo work.

K-pop has made inroads into the international music market in recent years, particularly with the global success of Psy’s “Gangnam Style”.

The song’s hit video — featuring that now-famous horse-riding dance — exceeded the maximum number of views on YouTube on Wednesday, at over 2 billion, prompting the site to upgrade its system.

Korean cinema and TV dramas have also been increasing in popularity around Asia, a phenomenon known as “Hallyu”, or the Korean cultural wave.