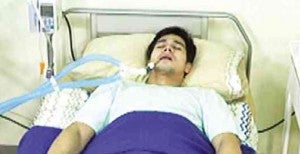 Some weeks ago, when many problems and crises beset the characters of “Hawak Kamay,” we wondered how the series would end, and volunteered the hunch that the show would opt for a “miraculous” resolution of its many “impossible” crises. Well, when we watched the last telecast on Nov. 21, the first half appeared to belie our hunch, because Piolo Pascual’s character ended up as a “flatliner” in the hospital. Earlier, he said his last goodbyes to his loved ones, so it really looked like the series would end up doing a “first” for local TV—allowing its hero to die!

But, hold your horses—remember our “hunch” about a “miracle-friendly” finale? It finally kicked in during the second half, where Piolo’s character found himself in an indeterminately “cloudy” or actually smoky terrain that, we figured, was supposed to be an approximation of the path leading up to the Pearly Gates!

There, Piolo met a boy who could have been the Santo Niño, and pleaded with him to give him more time to be a good father to his young children and— what do you know?— the beatific child obliged!

While we understand why the show opted for this “safe” conclusion (to avoid confounding and irritating fantasy-oriented viewers), it was still something of a letdown and a cop-out, especially since the show had made such a big to-do over the very real possibility of death, the briefness of life, etc. But, the show finally made its uncontroversial decision, so it’s up to viewers to take it—or lump it!

Despite its cop-out denouement “Hawak Kamay” was still a relatively good viewing experience, all told, because it tackled a number of topical problems and issues that viewers benefited from.

The show was also a landmark vehicle for the usually “handsome but phlegmatic” Piolo, because the many problems his character had to confront practically forced the actor to finally commit himself and his emotions to the extreme demands of the role assigned to him. We trust that the lesson he learned in the series will have a permanent effect on his forthcoming roles and career.

“Hawak Kamay” was also a productive vehicle for its relatively mature actors like Tirso Cruz III and Iza Calzado—but, sadly not so much for its child actors. They were talented, but the series’ unrealistic scripting obliged them to mouth long lines of dialogue that were much too mature, “knowing” and insightful for them.

The youngest character, Ningning, was particularly “victimized” in this regard, so while the little actress (Yesha Camile) playing the part was pert and precocious and all that, the impact she made was not as definitive as it could have been.

Still, we credit the series for making viewers regard parenthood, family relations, adoption, organ donation, and other significant topics with greater importance, and hope that the show’s characters aren’t the only ones who’ve learned valuable lessons in this regard!