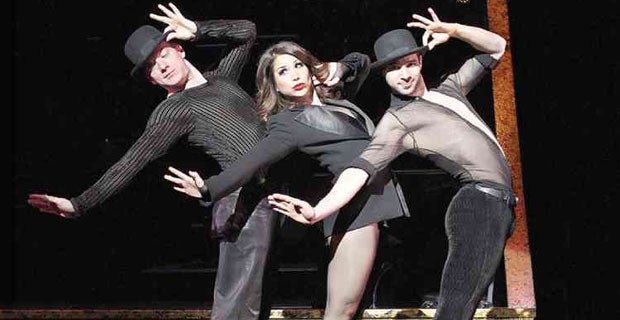 Ladies and gentlemen, [this is] the first time, anywhere [in the country], that there’s been an act of this nature: Not only one little lady but two! You’ve read about them in the papers and now here they are—a double header! [Two] killer-dealers [and] scintillating sinners: Roxie Hart and Velma Kelly.

Thus, we borrow The Announcer’s extro from “Chicago the Musical,” which starts its limited Manila season tomorrow, Dec. 3. It’s only half as intriguing as the intro, whose sharp pinch local audiences cannot possibly miss, not if they read or watch the news.

The gala premiere marks the grand opening of the 1,760-seat The Theatre at Solaire Resort and Casino in Parañaque City. Manila is “Chicago’s” only Southeast Asian touring destination this year.

Headlining the show are Broadway stars, Bianca Marroquin as Roxie Hart and Terra MacLeod as Velma Kelly. Terra has played Velma around the world. Bianca first played Roxie (in Spanish) in Mexico, and made her Broadway debut in 2002.

On Nov. 23, “Chicago” overtook the musical “Cats” to become Broadway’s second longest-running musical of all time, next only to “The Phantom of the Opera”—and the longest-running American musical.

James Cundall, chief executive of Lunchbox Theatrical Productions—which is bringing the show to Manila with David Atkins Enterprises and Concertus Manila— has declared “Chicago” his favorite musical: “It [has] a wonderfully humorous story, sensational dancing, toe-tapping music and an incredible cast of characters.”

“The score of ‘Chicago’ is based on the jazz idioms of the 1920s,” says Billig. “It is fun, clever, very catchy. As the orchestra is onstage, they play a very important role in the performance. We chose the [Filipino] musicians based on their training and experience. While it is important to have strong classical training, it is also important that they understand the jazz styles used in the show. The musicians we selected demonstrated an understanding of these styles.”

Set in the 1920s prohibition era, “Chicago” is about Roxie Hart, a housewife and nightclub dancer who kills her lover. To avoid conviction, she hoodwinks the public and the media by hiring a slick lawyer, who turns the case into a series of sensational headlines, to make her sympathetic.

This social satire’s sharp humor and themes of manipulation and greed are perfectly set in tune to the “hummable” music and provocative lyrics by Fred Ebb and John Kander, and showcases riveting choreography in the style of Bob Fosse.

Produced by Barry and Fran Weissler, the New York production opened in 1996 and was directed by Walter Bobbie, with choreography by Fosse student Ann Reinking.

The Manila season runs until Dec. 21, for a total of 23 performances (no extension possible, according to the Manila producers). Visit www.Chicagothe