Backstage chat with The Engineer

LOS ANGELES—Jon Jon Briones looked fresh and relaxed in his spacious dressing room at London’s Prince Edward Theatre despite having sang, danced and acted as The Engineer in “Miss Saigon” just a few minutes before. In The Engineer’s red-and-black jacket and pants, the actor earlier acknowledged the audience’s cheers and standing ovation for him and the rest of the cast. He has changed into a brown half-zip jacket, red shirt, blue jeans and brown shoes and warmly received us. 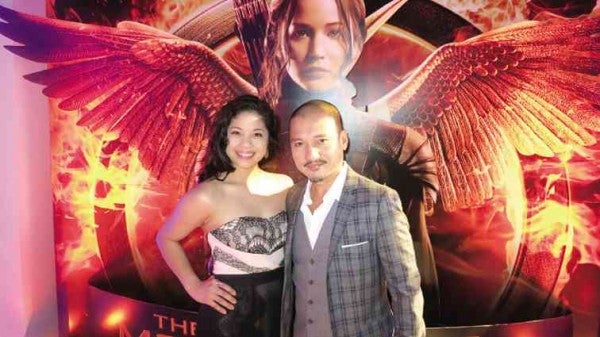 This time around, Jon Jon’s “businessman” is darker and more sinister. From being part of the original London ensemble in 1989 to now being the star of the show, Jon Jon has grown into the role and he claims it—he’s a mesmerizing, intriguing presence. At 49, with a sizable stage and personal experience behind him, Jon Jon is in full bloom as an artist and actor.

It was all evident at the Prince Edward Theatre, whether Jon Jon was cavorting with a Cadillac in his big number, “The American Dream,” or in his quiet moments with Kim, compellingly played by Tanya Manalang, an alternate who performed on the night we watched. Bravo to these two talents, Alistair Brammer (Chris), Tamsin Carroll (Ellen), Kwang-Ho Hong (Thuy), Hugh Maynard (John) and the rest of the cast who certainly shone on the London stage that evening!

Two nights earlier, we got to hang out with Jon Jon and Eva Noblezada at the premiere party for “The Hunger Games: Mockingjay—Part 1” at the Victoria House. We hope to catch Eva as Kim next time we’re in London.

It’s to Jon Jon’s credit that he was just as effective in a role that’s the polar opposite of The Engineer—the naïve, sweet Magno in Bernardo Bernardo’s Tagalog adaptation of “The Romance of Magno Rubio” at LA’s [Inside] the Ford in 2011. He earned LA Weekly and Ovation Best Lead Actor nods for his performance.

Based in LA, Jon Jon is married to singer-actress Megan Johnson, with whom he has two kids, Isa and Teo, who are budding actors.

In your sixth month as The Engineer in this 25th anniversary production of “Miss Saigon,” what are your thoughts about revisiting this role and this particular production?

I’m just grateful every day that it’s me doing this role in this wonderful city with this amazing cast. 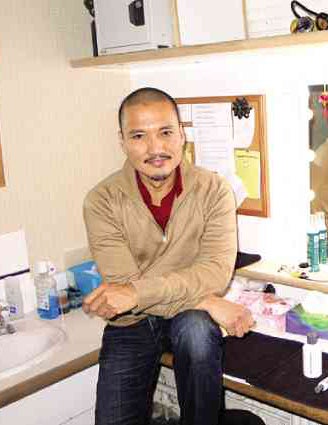 I like that your Engineer is darker and more menacing. How did you arrive at such an approach?

The whole thing developed through a rigorous but fun rehearsal process with my director Laurence Connor. We did the scenes with much more urgency—as if there’s a clock ticking away and you don’t want to know what happens when the time is up.

You’ve played The Engineer over the years. As you’ve grown and matured, how has that shaped your take on the role?

After doing the show in several productions, I’ve learned what works and what doesn’t. I just took the things I liked and made it better through the rehearsal process.

What have been the highlights and unforgettable moments so far?

Opening night, the 25th anniversary gala, the Royal Variety Performance and lots of other things in between. I’m blessed.

In what ways did Lea Salonga’s Kim make it a different “Miss Saigon” experience for you as The Engineer? And how does acting opposite Eva Noblezada and Tanya Manalang impact your performance as The Engineer?

For an actress to be chosen to play Kim means you have something special and these ladies are no exceptions. They are wonderful actors and singers. They bring their own personalities to the role, which makes them different from each other. I love them all.

How do you do it, energy-wise, when you have to play The Engineer eight times a week, with two performances on Thursday and Saturday?

I try not to think of it that way. I take it one day at a time, one show at a time, one scene at a time. If I didn’t, it would be overwhelming. And then I always put myself in a state of gratefulness.

How do you motivate yourself, since you’ve been playing the character for several months now?

The great actor Mark Rylance said, “Always aim for the present” and that’s what I try to do.

As part of the original ensemble, you watched Jonathan Pryce create The Engineer. What did you learn from him?

Watching Jonathan was like being in a master class. I truly believe I’m a better actor because of him.

On a lighter note, what have been your missed cues and onstage/offstage mishaps so far?

Nothing major, except a couple of times the Cadillac didn’t come out and there’s a set ad lib for that moment so I had to improvise.

Since Tam is played by very young child actors (boys and girls), what have been some of your interesting experiences with any of the kids who have played him?

They’re all great. They start off very shy and timid. After a few performances, they start kicking you in the leg.

Speaking of kids, I read that you lived in a convent, singing in its choir from the age of 9 to 14. Which convent and choir were these?

Tiples de Santo Domingo in Santo Domingo Church (Quezon City). I was there to have a better education for free and in exchange, I sang in all the Masses and lived there.

What do you enjoy about living in London? And what do you miss about Los Angeles?

You met your wife Megan while she was playing Ellen in a “Miss Saigon” production in Germany. How did the sparks start?

What’s the origin of your name, Jon Jon, which is from a distinctly Filipino tradition of nicknames like Bong Bong, Bing Bing and Ting Ting?

My mom was a great fan of the Kennedys when she was pregnant with me. She thought the young “John John” Kennedy was really cute so I was named after him but the spelling is different. Normally, it would have been Jun Jun.

Ten years from now, what do you think would still stand out in your memories of the 25th anniversary gala show?

Seeing my wife in the audience when the celebration started and waving at her and blowing her a kiss. We’re in this journey together.

What are the roles out there that you dream of sinking your teeth into?

I just want to keep working. Whatever the role is, I will sink my teeth into it.