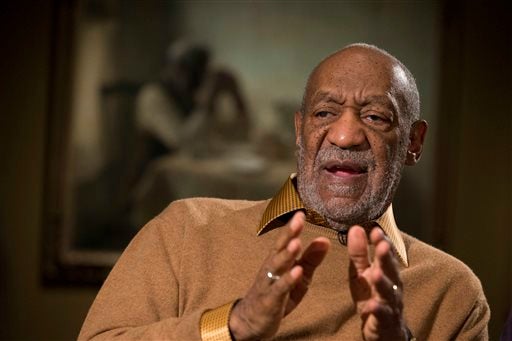 MELBOURNE, Fla. — Performances by Bill Cosby in Nevada, Illinois, Arizona, South Carolina and Washington State have been canceled as more women come forward accusing the entertainer of sexually assaulting them many years ago.

The director of The Broadway Center in Tacoma, Washington said Friday that it has canceled Cosby’s April 18 appearance because it conflicts with the nonprofit organization’s mission “to strengthen our community’s social fabric by building empathy, furthering education and sharing joy.”

“We were not confident in our ability to meet those objectives by proceeding with Mr. Cosby’s performance,” David Fischer said.

Cosby’s lawyer has said claims by four women are untrue; a statement from Cosby on Sunday dismissed most of the others as “decade-old, discredited allegations.”

Less than an hour before a sold-out show at a theater in Melbourne, Florida, Friday night, there was no sign of it being called off. Cosby’s producers said the 77-year-old comedian planned to go on stage, and at least 29 other shows remain on his schedule through May 2015.

Outside the theater, one protester held a sign that read, “Rape is no joke.”

Julie Lemaitre, 47, of Rockledge, Florida, said she was there just to have a presence and to try to say to people attending “think about what you’re doing.”

Other shows were canceled. Officials at the Treasure Island hotel and casino on the Las Vegas strip said Friday they mutually agreed with the comedian to cancel his Nov. 28 performance. No reason was given by the Diamond Desert casino in Tucson, Arizona, for canceling his Feb. 15 show.

Two other appearances, scheduled for April in Champaign, Illinois, also were called off Friday, as were February shows in Reno, Nevada, and in Florence, South Carolina.

A few fans in Florida, though, said they were at the Maxwell C. King Center For The Performing Arts to see good comedy and that the accusations didn’t influence them.

“Let them prove it. It’s old accusations,” said Paul Palmieri, 47, of Melbourne, who said he was ready to see “the king of comedy.”

“The press has tried him,” he said, noting that prosecutors didn’t bring charges. “These women if they want to settle it, they should settle it in court.”

Still, projects on NBC and Netflix have been canceled, and TV Land decided not to air reruns of “The Cosby Show” after recent allegations by more than six women that Cosby sexually assaulted them after giving them pills many years ago.

Josette Tornabene, 24, of Melbourne said she bought her ticket Friday for the show there, motivated by a radio station that was offering $1,000 to interrupt the performance.

“I wanted to see someone call him out,” she said. “I want to see him be held accountable.”

Some of the women accusing Cosby are going public again after initially coming forward around 2005, when Andrea Constand filed a civil suit alleging that she was sexually assaulted by him. The Pennsylvania woman’s lawyer said other women were prepared to make similar claims, but the case was settled before trial.

Tamara Green, a California attorney, was among those who had agreed to testify. She later said Cosby tried to sexually assault her in her Los Angeles apartment around 1970, when she was a model and an aspiring actress.

She said Cosby asked her to help him raise money to open a private dance club. When she got sick shortly after starting the project, she said Cosby gave her two pills that made her almost lose consciousness, took her to her apartment, undressed her and then took his clothes off.

“I got really angry,” she told The Associated Press in an interview on Friday. She recalled screaming and trying to break a window with a lamp as she fought off Cosby’s advances. He eventually left, leaving two $100 bills on her nightstand, she recalled.

“I think that my blood pressure and my fury was keeping me from losing consciousness,” she said.

Another woman, Joan Tarshis, decided to tell her story publicly for the first time on Monday.

Now 66, Tarshis said Cosby gave her drug-laced drinks twice in 1969, forcing her to perform a sex act the first time and raping her the second time. She said she told no one about this for decades, and only decided to go public when she read a Nov. 13 column in The Washington Post by Barbara Bowman, who alleges she was drugged and raped by Cosby when she was 17.

“I actually spoke with Barbara Bowman yesterday,” Tarshis told the AP on Friday. “It was great. Because she’s a person who understands what I’ve been through.”

Cosby’s representatives have broadly dismissed the accusations. He has never been charged with any such crime. Cosby himself has consistently refused to comment on it.

“We don’t answer that,” Cosby told the AP this month.