Is social media boon or bane? 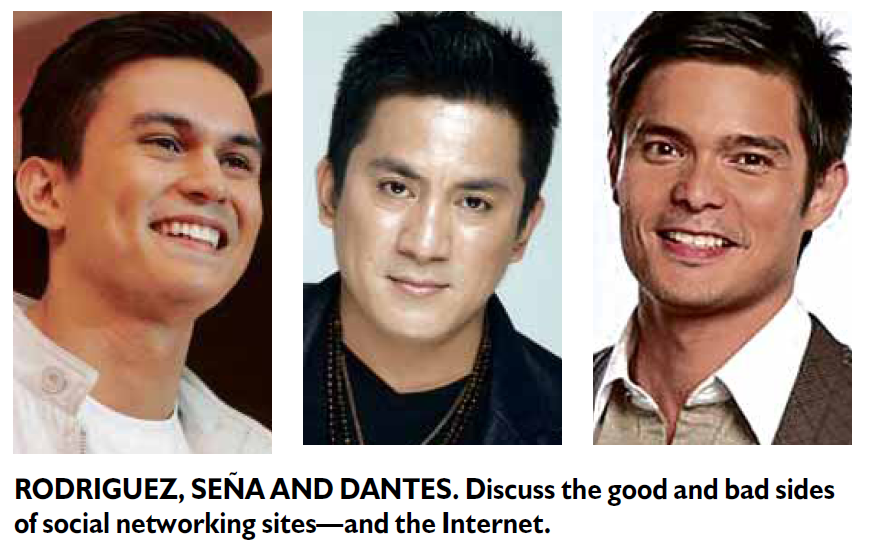 Is social media boon or bane? We asked some celebrities if maintaining an account on Facebook, Twitter, Instagram and other social networking sites is more helpful than destructive. Their takes on the contentious topic:

Tom Rodriguez believes that everything has its good and bad side. He explains, “The great thing about social media is its interactivity—it brings people together! The flipside is the anonymity and mob mentality it encourages. Sometimes, celebrities get demeaned, because netizens forget that we’re human. We have insecurities, and we get tired—that’s why we empathize with others who are experiencing the same thing!”

Kjwan vocalist and actor Marc Abaya stresses the need for social networking sites to stay free: “Social media represents freedom—which can be used irresponsibly. But, people should be allowed to say whatever they want, no matter how hurtful it is!

“I used to have a lot of haters when I began crossing over from music to acting, because I had to prove to them I wasn’t just Marilou Diaz-Abaya’s ‘entitled’ son. Then, you see the tide turning when you prove them wrong. My mom taught me that, while it’s true that haters can be destructive, you have to be able to discern which ones to listen to—because even negative reactions can help you get better!”

Dingdong Dantes likes the accessibility to instant information—right at his fingertips: “I treat it with an open mind. Social media is helpful if you use it properly. I also have bashers, but I make sure I’m 10 feet ahead of them—alam ko na kung ano’ng sasabihin nila! I respect dissenting opinion—even if it hurts. So, kahit isang tao lang pero medyo malaman ang sinasabi, it matters to me. That’s how the feedback mechanism operates! If no one hates you—and vice versa—there’s probably something wrong with you!”

Theater luminary Robert Seña, who’s part of the cast of ABS-CBN’s “Two Wives,” loves the limitless information he gets from social media: “It gives us access to everything, any time we want it! But, too much of it is unhealthy—because you can get addicted to it!”

Ruru Madrid takes the negative aspects in stride. “I laugh it off. One time, some fans of the Julie Anne San Jose-Elmo Magalona love team weren’t pleased when I was paired with Julie Anne on ‘SAS,’ and they sent me threatening messages! But, you have to know which posts to take seriously.”

Rodjun Cruz has a more drastic approach to haters, though: “Some messages inspire you to do better—but, with haters, I just block them automatically—that way, wala nang stress (laughs)!”

Here’s what Rhian Ramos thinks: “I’m all for the readily available information we get. What I don’t like is that it can be dangerous, because there are people out there who are putting out irresponsible posts, regardless of whoever is receiving the information! For some, it’s all right to be anonymous and cowardly!”

Gabby Eigenmann likes it because of the instant feedback he gets from netizens. He shares, “Acting isn’t easy—sometimes, it takes blood, sweat and tears to please viewers. So, it’s fulfilling when they see how hard you work. However, it becomes a problem when you can’t handle (negative) criticism well.”

For RCS member and theater actress Celine Fabie (who just won in the nonfiction category for the bio of her lola, veteran actress Mona Lisa, in the National Book Awards), the social media is helpful in marketing, self-promotion and sharing ideas: “It provides a medium to express yourself to the world.

“But, destruction comes with excess. It doesn’t really reflect real life: We get preselected and edited information in people’s shout-outs—like an entertainment magazine gone haywire! Knowing when to stop and smell the flowers is still more satisfying than spending most of your time picking the perfect filter for every info you share in cyberspace,”

“Social networking sites make you overcritical about yourself,” says Glaiza de Castro. “Hindi ko pinapatulan ang haters—although I did answer once, when somebody attacked me about my acting. Televiewers don’t realize that actors sometimes do 40 to 50 sequences a day—so, even when you give 100 percent of yourself to your character, at some point, something’s gotta give!”

Finally, Lovi Poe enthuses, “The public judges you according to the projection of the characters you portray. We have to be open-minded about it—but, at the end of the day, you know yourself better. You can’t please everybody!”