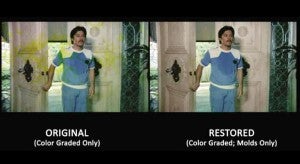 Even movies based on komiks novels and radio serials deserve a new lease on life.

Although fairly recent productions, both films needed to be saved posthaste. Leo Katigbak, head of ABS-CBN’s Special Projects, recalled that prints of “Hindi Nahahati” had “molds and fungus marks.”

He explained, “‘Kapag Langit’ had the same issues, plus breathing or video waves and some embedded scratches. Our team also encountered the usual problems— missing frames, watermarks, optical dirt.”

A crew of nine to 12 people usually works on a movie. “On Central Digital’s side, we have several restoration artists, plus a colorist, scanner, editor and audio expert,” Katigbak pointed out. “On ABS-CBN’s side, we have an audio engineer and foley artists. In some cases, we also bring in a composer to reconstruct missing musical score.”

The team worked on “Hindi Nahahati” for 1,400 hours spread over four months, from May to September 2014.

The restored “Hindi Nahahati” will be unveiled tomorrow at TriNoma, as part of this year’s Cinema One Originals fest.

The “Kapag Langit” team has clocked in 1,000 hours at press time, and counting. “It will be a photo finish on its premiere night at Trinoma on Nov. 16. Both films required 100 hours of color grading.”

Katigbak said it is imperative to save all films, regardless of genre. “We have [in our archives] representative works of the masters. Mike did just a handful of films and even his most commercial work (like ‘Hindi Nahahati’) is of a higher caliber [than most films].”

These are timeless movies, Katigbak asserted, in spite of the dated costumes and hairstyles. “Both films offer a snapshot of Philippine moviemaking during a particular era.”

When “Hindi Nahahati” was first released, De Leon, after a tiff with producers, asked that his name be stricken off the credits. For the remastered film, the name goes back on the credits.

Katigbak recalled, “Mike said he wanted to give us a free hand, especially since the producer (Vanguard Films) was a different party. He appreciated my updates and even gave helpful suggestions and insights.”

At the time Central Digital and ABS-CBN were working on “Hindi Nahahati,” De Leon was busy with the restoration of Lamberto Avellana’s “Portrait of the Artist as Filipino” (1965), which is being restored by the Film Development Council of the Philippines.

“Mike was focused on ‘Portrait,’ which was produced by his father (Manuel de Leon of LVN),” Katigbak said.

DINA Bonnevie in “Hindi Nahahati,” said to be a timeless film, in spite of the dated costumes and hairstyles

After tomorrow’s debut, in the pipeline for “Hindi Nahahati” is a commercial run later this month, plus cable airing and an iTunes and DVD release next year. A theatrical release for “Kapag Langit” is set next month.