MANILA, Philippines—The Philippine premiere of “Mga Anak ng Unos (Storm Children),” the latest masterpiece of world-renowned filmmaker, Lav Diaz, was held on November 4, 2014, Tuesday, 7 pm at the Cinema 6 of Ayala Trinoma Mall. The Philippine premiere was presented by Dakila – Philippine Collective for Modern Heroism, an artist group inspiring social consciousness formation, in partnership with the Embassy of Canada, Voyage Studios and the Film Development Council of the Philippines.

“Mga Anak ng Unos (Storm Children)” tackles how children deal with devastations after the storm. The compelling photography of Diaz beautifully weaves the story of three children and how they cope with disasters. The special screening is for the benefit of Dakila’s climate revolution campaign, which initiated the Climate Walk from Manila to Tacloban and for the trust fund of the children featured in the film.

According to Dakila Vice President and musician-activist, Noel Cabangon, “As changing weather patterns bring about strong typhoons like Yolanda, climate change has already become an issue of human survival. With the worsening impacts of climate change being most felt in developing countries like the Philippines, the issue of climate change is now more real than ever.”

The Philippine premiere of “Storm Children” is held in partnership with the Embassy of Canada. The Government of Canada is one of the countries that have taken decisive action to provide assistance to the people affected by Typhoon Haiyan. 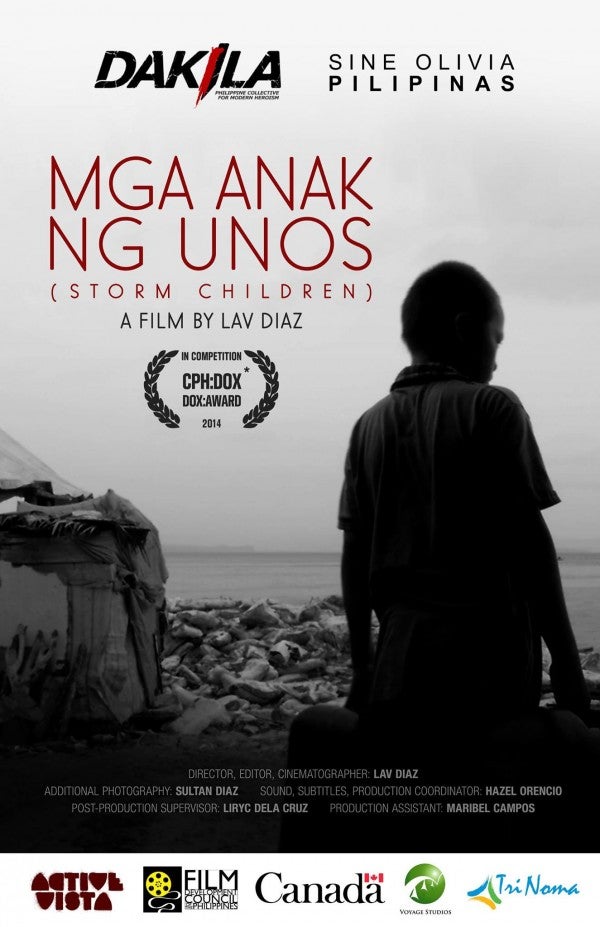 Canadian Embassy Political Counsellor, Elizabeth Baldwin-Jones, who graced the screening of Storm Children, said in behalf of Ambassador Neil Reeder, “The Embassy of Canada is pleased to be a partner of the Philippine premiere of this important documentary from an acclaimed filmmaker.

“We at the embassy would like to see our engagement in this initiative in two lenses: first is a tribute to an outstanding Filipino director – Lav Diaz, who, with his recent feature film ‘Norte, End of History,’ wowed audiences at the Toronto International Film Festival.   And the second is a constant reminder of the need to prepare responsibly for disasters and natural calamities.”

She added, “The Government of Canada has contributed Cad$ 85 million in humanitarian assistance to Yolanda-affected communities in the Philippines. This matches the Cad$ 85 million raised by private companies, organizations, and ordinary, civic-minded Canadians, bringing the total of our assistance to Cad$ 170 million (approx. PhP 6.8 billion).

“We are committed to support the long-term rehabilitation plans of the Philippines in rebuilding the communities devastated by Yolanda. Complementing that support is our advocacy to promote disaster preparedness and risk reduction. Following on the Philippines’ ‘Build back better’ vision, we’d like as well to see communities and cities taking disaster risk reduction and preparedness seriously and consistently.”

In 2013, the Philippines suffered the tremendous impact of Typhoon Haiyan, taking almost 10,000 lives and destroying farmlands, fisheries, and livelihoods of people. Months after, Southern Luzon and Northern Visayas were again hit by Typhoon Rammasun (Glenda), which damaged billions-worth of infrastructures and livelihood. Recently, Typhoon Mario (Fung-Wong) flooded the streets of Metro Manila, paralyzing the country’s capital and causing about PhP 1.14B crop damage.

Dakila, the group that presented the film screening, has been in the forefront of campaigning for climate action. Advocates taking part in the Climate Walk encouraged local government units along the route to commit to taking action against the climate crisis by committing to draft their own Local Climate Change Action Plans (LCCAP) and Disaster Risk Reduction Management Plans (DRRM). The Climate Walk for Climate Justice calls on world leaders to arrive at arrive at a fair and binding deal and take concrete actions on climate change.

Dakila Executive Director, Leni Velasco, in her statement said, “The Philippine premiere of Lav Diaz’ Storm Children comes in a very relevant time when our nation needs to focus on the impacts of climate change and disasters to our people’s lives, especially to our children who are most vulnerable and at risk.

“Every day we confront the reality of climate change – uncertainties over food security, water and the vulnerability to diseases and natural disasters. And for a developing nation like the Philippines, this reality is far worse. A year after Yolanda, the nation is still in shambles – with many of our country men still displaced, with no secure jobs or livelihood and still vulnerable when the next disaster strikes.”

In his director’s statement, Diaz likened the storm to the system that continues to wreak havoc in the lives of the Filipino. He said, “And if I may dwell on the figurative side of storms battering the Filipino, the psyche comes into the fore. The worst storms, man-made storms, become evil batterers of the Malay soul—think of the long years of Spanish and American colonization, the Japanese Occupation of World War II and the brutal Martial Law years of the dictator Ferdinand Marcos. Institutionalized corruption in our system and culture bleeds the Malay Filipino. This is the most relentless storm.”

Ending her statement during the screening, Velasco said, “Dakila presented this important film because we believe in the vision of Lav Diaz. Our film program, the Active Vista Human Rights Film Festival, believes in the power of cinema to project truth, truth that scares us, truth that shocks us, truth that moves us to action.

“We can no longer wait for another Haiyan. We need to fundamentally change the way we live, and the way things work in our planet. It is time we take part in this climate revolution.” Velasco ended.

Environment advocates, civil society organizations, the art and film community came in full force for the screening of “Storm Children”. Prior to the screening, an exhibit on the climate walk was unveiled to the public.

In the mood for Lav