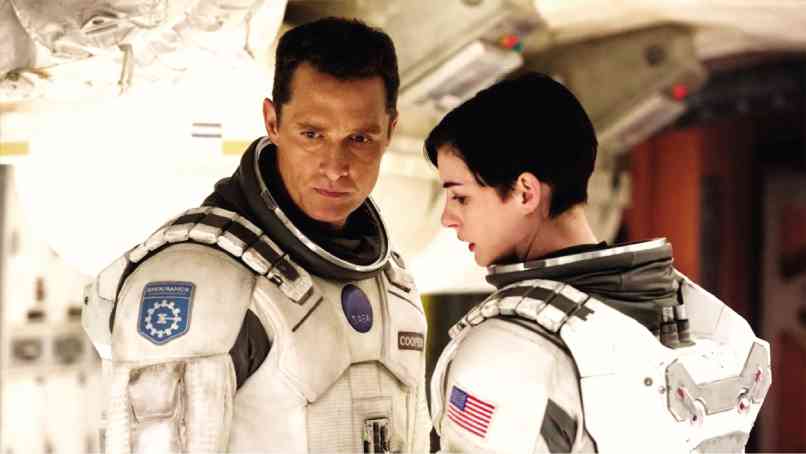 MCCONAUGHEY AND HATHAWAY. Race against time to save the human race from extinction.

In “Interstellar,” the future of the human race is in dire straits 10 years after an epidemic of devastating blight decimates much of its food supply, resulting in widespread famine and alarming dust storms. The world relies on corn, the only viable crop left, to feed its six billion inhabitants.

The urgent questions director Christopher Nolan (“Inception”) raises in his spectacularly immersive sci-fi adventure are as terrifying as they are increasingly plausible: What do we do if Earth ceases to be viable for human habitation? Are there other worlds in our solar system and beyond that can sustain life?

The universe—or a Higher Being, as the film boldly suggests—works in mysterious ways, as does Nolan’s visionary film, which attempts to answer those questions by springing one tantalizing surprise after another, as it sends Matthew McConaughey, Anne Hathaway, Matt Damon and a witty robot called L.A.R.S. hopscotching through space and time.

When a wormhole, which creates shortcuts between widely separated regions of spacetime, is discovered near Saturn, widowed former space engineer-turned-farmer Cooper (McConaughey) is called in by a NASA-backed underground agency to lead a four-man mission—to explore potentially habitable planets on the other side of the wormhole!

Cooper’s skills have been deemed useless ever since the world decided to disband its armies and turn its focus on farming. He must retrace the intergalactic trajectory taken by veteran space explorer, Dr. Mann (Matt Damon), and leave behind his children (Timothee Chalamet, Mackenzie Foy)—with no assurance for a return trip!

Nolan mesmerizes with a film that transcends the limitations of space and time. Every second counts as Cooper, Dr. Amelia Brand (Hathaway), Doyle (Wes Bentley) and Romilly (David Gyasi) explore the flood-ravaged terrain of a seemingly viable but ultimately sterile planet.

Every hour spent on these planets is equivalent to—seven years of Earth time! Cooper’s face is a treasure trove of contrasting emotions when he sees the continually aging faces of his loved ones back home (Jessica Chastain, Ellen Burstyn, Casey Affleck)—he can receive video messages, but can’t reply to them!

Lending credibility and plausibility to “Interstellar’s” limitless cinematic canvas is theoretical physicist Kip Thorne, whose work unraveling the most exotic mysteries of the universe forms the scientific backbone of its script.

In the majestic universe Thorne conjures up with Nolan, time is represented as a physical dimension that utilizes love (!) as a quantifiable tool used to reconcile the laws of relativity and quantum mechanics. The production questions the role we play in the larger scheme of things. If science can explain everything around us, who, then runs them with clockwork precision?

These mind-blowing concepts of time, interstellar travel and spirituality constantly interacting with the way people relate with one another aren’t always easy to grasp, but they’re grounded in scientific fact that makes the film bristle with urgency and existential pertinence.

Despite its overreaching ideas and lengthy running time, “Interstellar” is a thrilling romp across the universe that is anchored on the intimate relationships of its protagonists, bolstered further by the persuasive portrayals of McConaughey, Caine, Burstyn and Chastain.