All praise for Filipino actress 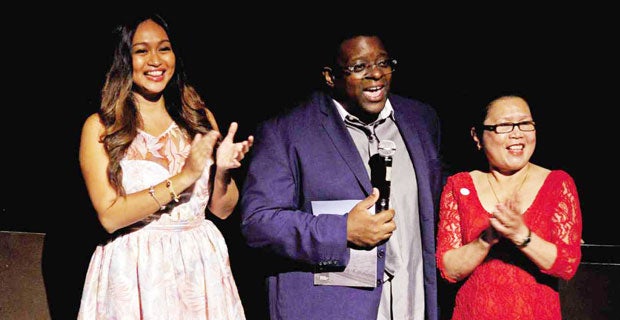 British installation artist and filmmaker Isaac Julien has described Filipino actress Mercedes Cabral, who is part of his film/installation “Playtime,” as the “best young actress I’ve worked with.”

“I work by intuition; I personally picked the actors for this project,” Julien told the Inquirer after a special screening of “Playtime” last week at the De La Salle College of Saint Benilde in Malate, Manila. “I met Mercedes only when we started shooting.”

Cabral flew to Dubai in June 2013 for the project. “We shot eight to 10 hours everyday,” she recounted. “Isaac was very specific about what he wanted from his actors—

how fast I should walk, how I should wipe a tabletop. If he didn’t like what I did, he made me do it again and again until he was satisfied. He also said I should be able to convey the right emotion without words.”

She said after the screening: “Isaac is very strict about imagery, since this project is not a narrative. It’s an ‘installation,’ for a split-screen. This is the first time I saw it on a single screen; it actually works.”

“Playtime” is set in three cities—London, Reykjavik and Dubai. It is part-documentary and part-fiction.

Cabral plays a house worker. Her story is based on the life of Liza Perez, a former overseas Filipino worker in Dubai, who now works with Julien, a British national. “I’ve known Liza for 13 years,” said Julien. Perez, who was present at the screening, recalled, “I didn’t know that he was a filmmaker when I met him and told him my story. I’m very happy with what I saw today.”

Cabral said, “I saw a video of it on YouTube. I was really surprised. I was like, my face all over Times Square? This can’t be real. My parents are very proud. I’m happy that my mom saw the whole of it today.”

The actress will be seen in the Jay Abello movie “Red,” an entry in the Cinema One Digital Film Festival, which starts Nov. 9. She will also start promoting an independent movie shot in Denmark this month.

Cabral is a semi-regular cast member in the soap “Hiram na Alaala” on GMA 7. ([email protected])