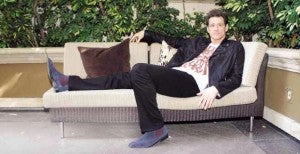 “IT’S all digital, man,” Jim Carrey, 52, jokes about his own face, virtually the same as when he did “Dumb and Dumber” 20 years ago, except for a few wrinkles. photo: Ruben V. Nepales

LOS ANGELES—“I think everybody should do what they need to do to feel good about themselves,” Jim Carrey began when asked in a recent interview about his former girlfriend Renée Zellweger’s new look.

“A lot of times, when people get work done, initially, it doesn’t look right. Then it settles in and it looks great,” the actor said. “I have heard that about my ex-wife Lauren Holly,” the actor said. “There was a [time] when I looked at her and I was like, oh, she had some stuff done. Now, she looks amazing. So you have to give people a chance.”

He added in this chat at the Four Seasons Hotel in LA, “We immediately judge people because it is a commodity to judge people. It appeals to the lowest denominator in our society. I am never going to do that. She (Renée) is a great lady.”

“It’s all digital, man,” Jim, 52, joked about his own face, virtually the same as when he did “Dumb and Dumber” 20 years ago, except for a few wrinkles. His spiky hair went well with his black leather jacket, white T-shirt and slim slacks.

Complimented about his six-pack, which he showed off in “The Incredible Burt Wonderstone,” Jim replied, “That’s what happens when you don’t eat wheat, dairy, sugar, drink coffee, or do drugs or alcohol. You pretty much stay good.” He quipped, “And I live in a pickle jar.”

Asked about his recent comment that he’s dating women who aren’t famous so he can keep a low profile, Jim clarified, “I might have said that when I was pissed or something. That’s not a hard, fast rule. I have always been attracted to talent—that’s quite an aphrodisiac. If someone is beautiful and talented, it’s hard to resist.”

Jim, whose previous relationships with Renée, Lauren and Jenny McCarthy were, of course, high-profile, stressed, “As far as dating and stuff goes, I am in love with everybody—all shapes, sizes and whatever. I don’t know how to come down. I have a lot of short relationships. People get mad at me because I can’t stay in a relationship. But… I am sure there is someone who will make me want to. I don’t feel compelled to be completed by a relationship. I feel complete. I want to share myself and my life with people I care about. I am just dating. I am seeing people. If somebody bowls me over, that’s great. But I am not in a state of need in that regard.”

The comedian was recently in the news for being among those who hilariously parodied Matthew McConaughey’s weirdly contemplative Lincoln MKC commercial. “I love Matthew but 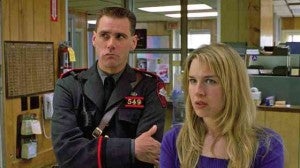 when I saw those commercials, I realized that he had to be stopped,” Jim quipped with his famous grin. “I kind of threw myself in front of the car, is what I did.”

Jim recently met one of his idols, Jerry Lewis, for the first time. Driving by the Saban Theatre in Beverly Hills, he saw on the marquee that the comic legend was appearing in a one-man retrospective show that night. “I had never met him,” Jim said. “He is 88 years old now. I saw [the marquee] and I went, oh my God, I have to be there. I [took] the backstage door, walked around, looked around and Jerry Lewis was just sitting there in his tux, waiting to go on.”

Jim continued: “I don’t think he recognized me [at first]. “I came up to him and he went, ‘Oh wow, you are here, we are finally meeting.’ It was just the greatest feeling in the world. It was fantastic.

“Then I just started thinking of things like, what if I came in with a mop? He went, ‘You will screw up the whole show!’ He did his thing. It was such a thrill to see him. He did his typewriter bit so I was in heaven. I was backstage and I took a picture of myself and he’s about this big in the frame. I get to live out such incredible things sometimes. It was lovely. Maybe he will play my dad in something someday.” 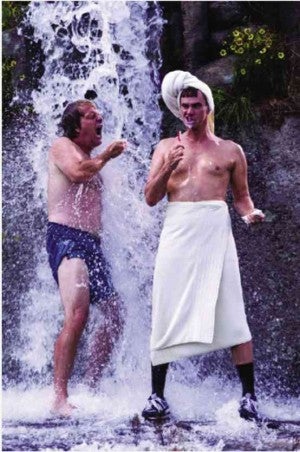 JEFF Daniels (left) and Jim Carrey in “Dumb and Dumber To”

In “Dumb and Dumber To,” directed again by the Farrelly brothers Bobby and Peter, Jim and Jeff Daniels reprise their dimwit characters, Lloyd Christmas and Harry Dunne, respectively. Their costar is no less than Kathleen Turner, who plays Harry’s ex-girlfriend.

“She’s a total trouper, completely brave and amazing,” Jim said of the actress known for her husky voice. “She was willing to do everything. I think she heard that the script called for a Kathleen Turner type. Kind of older and a little past it. She said, ‘I can do that’ (laughs). For me, it was a thrill because Kathleen Turner was it when I started out. She has done some incredible work. She’s still a beautiful lady.”

Behind the funnyman is a multi-faceted human being that not many people know. He is the founder of a nonprofit organization, The Better U Foundation. “We support ideas that are self-sustaining and help people empower themselves,” he explained. “One of the biggest things that we have been doing is the SRI (System of Rice Intensification), a system of growing rice based on simply giving the roots room to grow. It takes 70 percent less water, 90 percent less seed and yields four times as much for the very least rice, volume-wise.”

(SRI was developed by a Jesuit priest, the late Fr. Henri de Laulanie, in Madagascar to help poor farmers. More information is available at www.betterufoundation.org.)

Then there’s Jim, painter and sculptor away from the cameras. “I paint every day when I am not working,” he disclosed. “I am in my studio 10 to 12 hours a day. I am quite mad. I have done 10 feet, one and a half tons of bronze sculptures. I am very serious about it. I haven’t revealed it to the world because I am trying to figure out the best way to do that without becoming bogged down by the business [aspect].”

He volunteered, “I am a firm believer in affirmation—that you already are in the place you want to be. Don’t think about how much you are getting paid; don’t think about any of that 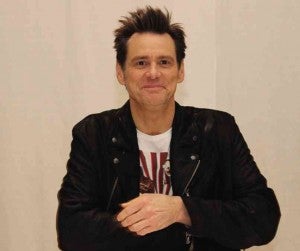 HE STAYS away from wheat, dairy, sugar, drugs and alcohol. photo:Ruben V. Nepales

stuff. It’s the same with my art right now. I am just painting and sculpting until I know [I have] something really original to show. Everybody wants to make it real quick. They get a tiny bit of heat and they get offered a reality show. They go and do a reality show and sell themselves out.

“The other thing is spirituality,” he said of another one of his interests. “You are not connected to something; you are everything. There’s a lot of freedom in that.”

If there’s one area that he feels dumb in, it’s technology. “I am constantly at odds with [it]. When I turn a computer on, I feel like it’s telling me to get off the planet. It’s kind of an enemy (laughs). I do enjoy it when it works but… it’s like a conspiracy.”