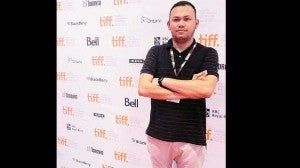 ADOLFO Alix Jr. calls Tiff “one of the most important festivals in North America.”

Amid a sea of famous faces from Hollywood, four Filipino movies were shown at the 36th Toronto International Film Festival (Tiff), including Adolfo Alix Jr.’s “Isda (Fable of the Fish)” and Joseph Israel Laban’s “Cuchera.”

Alix’s “Isda” was shown in the Visions section, along with compatriot Lav Diaz’s “Siglo ng Pagluluwal,” at the fest held in the Canadian city from Sept. 8 to 18.

Laban told Inquirer Entertainment that, “as a first-time filmmaker,” he is elated to be part of the same contingent as “Diaz, Martin and Alix who are already established names in the international film fest circuit.”

Laban looked at the Tiff invite as a chance “to tell Filipino stories on an international platform. Personally, I see it as an opportunity to contribute to the ongoing dialogue on cross-border drug trafficking and the almost systemic victimization of Filipino drug mules.”

An entry in the New Breed section of this year’s Cinemalaya, “Cuchera” follows drug mules as they prepare for a doomed trip abroad.

For Alix, the trip to Toronto is a “sentimental journey” of sorts.

“It’s a homecoming… My first film as a scriptwriter, Carlos Siguion-Reyna’s ‘Kahapon May Dalawang Bata,’ won the People’s Choice award in Toronto in 1999,” Alix recalled.

In 2008, he brought legendary Filipino actress Anita Linda to Toronto with the film “Adela.” “Anita was mobbed by fans after the screening.”

This year, Alix presented “Isda,” a gritty yet magical look at a tabloid story: A slum dweller who gave birth to a fish.

He is glad to have been included among the four Pinoys in the Tiff lineup. “I am a fan of Lav’s work. It’s always great to be with other Filipinos in film fests abroad because it shows the diversity of stories that Philippine cinema has to offer.”

That is precisely the strength of the current local indie scene, Alix noted. “We make different films about the Filipino condition and this diversity renders each work a unique piece of cinema.”

Surely, the Philippines made its presence felt at the Tiff this year.

“Last year, there was no Filipino film in Toronto,” Alix said. Having four Filipino entries was a windfall because “the Tiff is one of the most important festivals in North America. Screening in Toronto can open doors to a lot of possibilities.”

“Isda,” an entry in the Directors’ Showcase in this year’s Cinemalaya, had been picked up by US firm Visit Films even before the Tiff screening.

“I got to meet potential distributors,” Alix related. “It was good to hear their thoughts on the film and its potential.”

The Tiff audience “got caught up in ‘Isda,’” Alix recalled. “They commended lead star Cherry Pie Picache for portraying a simple but complex role.”

Laban was thoroughly impressed with the  Toronto audience. “Most of the viewers asked about the inspiration behind my film and had specific questions about the setting.”

How can Filipino filmmakers sustain the world’s interest?

Laban conceded that “there’s no easy answer to this.” A more crucial question, for him, was: “How can we sustain the interest of Filipino audiences without merely appealing to the least common denominator?”

Alix remarked: “Filmmakers should just continue making their films. Different sensibilities matter and these stories greatly contribute to the world’s view of Philippine cinema. Let us not lose our own unique voices.”

Laban agreed: “We can probably sustain the world’s interest… by telling stories important to Filipinos and consequently offering a unique insight to contemporary social inequities and the human condition.”

But even if they fail to keep the world interested, at least they were able to contribute stories that shed light on the darkness that is life in these islands “at this juncture in our history,” Laban said.