This week, the movie to watch is Antoinette Jadaone’s “Beauty in a Bottle,” which strings together the intersecting stories of starlet Estelle Suarez (Angelica Panganiban), hotshot advertising agent Vilma Ledesma (Assunta de Rossi) and realtor Judith Madamba (Angeline Quinto) as they cheekily poke fun at society’s pathological obsession with unattainable standards of beauty.

Estelle, Vilma and Judith represent a growing number of women who take ludicrous steps to measure up to people’s impossible expectations of them. Onscreen, we see middle-aged celebrities whose immobile faces are as devoid of wrinkles as they are of noticeable emotion! 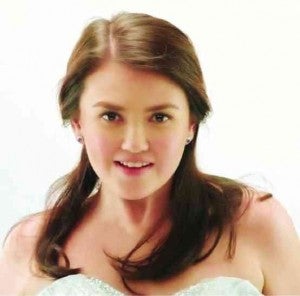 In a thespic high-wire act, the brilliant Angelica is a “dramedic” wonder as Estelle, who takes vanity to the extreme when she realizes she’s no longer as young, fresh and skinny as she used to be (she now has a triple-chin), especially when she’s beside gorgeous Empress Schuck (who portrays a scheming, preening version of herself), who’s gunning for the same endorsement deal Estelle is rooting for.

Vilma is also getting her veteran feathers ruffled with the arrival of new “It” girl, Tanya Jacinto (Ellen Adarna). But, she sure as heck isn’t ready to take her “dethronement” sitting down!

Judith’s insecurities are just as debilitating. She’s no slouch at what she does (she has sold 10 properties in six months)—but, her so-so looks and middleclass lifestyle make her feel unworthy of the attention she gets from her rich boyfriend, Pocholo (Tom Rodriguez), and his family. Will she be able to keep up with the Joneses if she revamps her wardrobe and physical appearance?

Time and again, we’ve been told that beauty isn’t skin-deep—but, that hasn’t stopped us from thinking about how much better our lives would be if we were thinner, taller, fairer, smarter, smoother, younger, richer—etc.!

The insightful film hits the ground running, but falters with a rushed and awkwardly resolved ending.

Assunta’s knack for self-deprecation is something to behold. She strikes a perfect balance between hilarity, irony and vulnerability. The uneven Angeline’s “loopy” cluelessness serves her characterization well: She sometimes tries “too hard,” but when her jokes hit their mark, they’re roll-in-the-aisles funny!

Angelica is a joy to watch. She vividly mines Estelle’s insecurities in a delicious, laugh-out-loud portrayal that is alternately rip-roaring and heartbreaking in its winkingly wicked pertinence. She shuttles between drama and comedy effortlessly, and with judicious gusto. More than anything, the film proves why Angelica Panganiban is her generation’s most versatile actress!