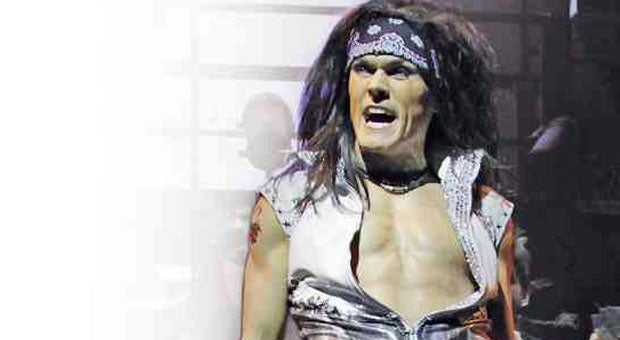 MIG AYESA as Stacee Jaxx in “Rock of Ages”

For Filipino-Australian theater actor-singer MiG Ayesa, who’s in the country for the third time to reprise his role as Stacee Jaxx in the local staging of the musical “Rock of Ages,” one of the biggest challenges of playing the same character for an extended period of time is keeping it fresh.

“Every performance should look and feel like it’s your first time—which is tough,” Ayesa, 44, told a small group of reporters in a recent interview. “But this is why I also love theater.”

The good news, he jested, is that he has a terrible memory. “Every day for me is brand-new!”

Ayesa first played Stacee—a disillusioned, over-the-hill rock star about to do his last show for the band Arsenal in a small club on Sunset Strip—in 2010 for the production’s first national tour in the United States. The following year, he joined the cast of the musical’s restaging on Broadway.

Working with a different cast and audience keeps him on his toes, he said, and he still looks forward to every performance. The show features songs from popular acts like Styx, Journey and Bon Jovi. It may appear fun, he noted, even silly. “But the effort that goes into it is very serious. We’re talking about long hours and hard work. Even the comedic aspects require precision and there’s no space for sloppiness.”

Singer-actress Kayla Rivera, who previously starred in musicals such as “ In the Heights,” “Aladdin” and “The Addams Family,” is the new addition to the Philippine cast of “Rock of Ages,” which is all set for a limited run from tomorrow, Oct. 31, to Nov. 9 at the Meralco Theater.

“MiG is such a great, sincere and genuine talent,” said Kayla, who plays Sherrie. “It’s a pleasure to work with him.”

Ayesa, who was a finalist in the 2005 talent search “Rock Star: INXS” on cable channel AXN, said this year’s staging is “bigger and brighter. We take comfort in knowing that the formula works. Also, I’m excited because we are moving to a bigger venue and we have new sound and stage designs.”

Asked if he aspires to produce his own musicals in the Philippines someday, Ayesa admitted that he has given it some thought, having noted a growing interest in theater here.

“There’s an abundance of talent and good material here, so why not?” said Ayesa, who has starred in other musicals—the most recent among them “We Will Rock You,” “Annie,” and “Thriller Live.”

“The success of shows like ‘The Phantom of the Opera’ and ‘Wicked’ in Manila points to a growing audience,” Ayesa said. “International companies such as Lunchbox Theatrical Productions are taking the Philippines seriously now.”

He’s heard about Philippine Educational Theater Association’s “Rak of Aegis”—a local production built around the music of the seminal OPM rock band Aegis. “I’d like to see that for myself!” Ayesa said.

As recording artist, he said, he’s not currently signed with a label, but he continues to write material in hopes of releasing his own solo album. “I have a couple of songs in the can, but there’s no pressure to finish it right away,” he said.

Theater seems to be Ayesa’s priority at the moment, but his dream of becoming a rock star remains alive. “I want to do both—I shouldn’t have to choose. I hate being pigeonholed,” he said. “You can’t just wait for the next offer to come. You have to do other things to keep the creative juices flowing.”