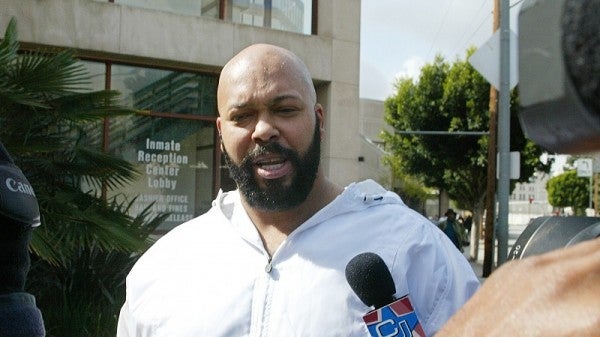 In this Feb. 26, 2003 file photo, rap music mogul Marion “Suge” Knight walks out of the Los Angeles County jail, in Los Angeles. Los Angeles prosecutors say Knight and comedian Katt Williams were arrested and charged with one count of robbery on Wednesday, Oct. 29, 2014, after a paparazzo reported the men stole her camera in Beverly Hills on Sept. 5, 2014. AP

LOS ANGELES—Suge Knight and comedian Katt Williams were arrested and charged with robbery Wednesday after a celebrity photographer reported the men stole her camera last month.

Prosecutors say Williams and Knight, who founded Death Row Records, were arrested Wednesday. Knight has a prior conviction for assault with a deadly weapon and could face up to 30 years in prison if convicted.

The men are accused of taking a paparazzo’s camera in Beverly Hills, California, on Sept. 5. The incident remains under investigation by Beverly Hills police, who did not immediately return a phone message seeking comment.

Williams, who was arrested at a Los Angeles-area courthouse when he appeared for an arraignment in a separate assault case, faces up to seven years in prison if convicted.

Knight, 49, was arrested in Las Vegas. Police said he was taken into custody without incident.

Williams, 43, has starred in several comedy specials and appeared in films such as “First Sunday” and “Friday After Next.”

Knight was shot and wounded in a West Hollywood, California, nightclub about a week and a half before the incident with the photographer. He founded Death Row Records, one of rap’s leading labels in the 1990s, but later declared bankruptcy and the company was auctioned off.