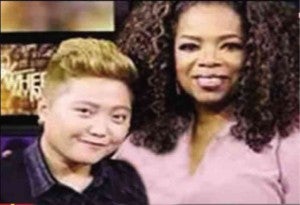 Singer Charice Pempengco reunited recently with talk show host Oprah Winfrey, who once touted her as the “the most talented girl in the world.” The 22-year-old recording artist sat down with her ninang (godmother) for an interview, which will be aired on Oct. 19 in the US reality TV series “Oprah: Where Are They Now?”

(Charice asked Winfrey to be her godmother, and was baptized and confirmed in Catholic rites on May 22, 2010.)

In a teaser video uploaded to the official YouTube account of The Oprah Winfrey Network, the media mogul was shown asking Charice—who came out as lesbian last year—if she “were thinking about transitioning to becoming a male.”

On “The Buzz” last June 21, Charice admitted that she was a bundle of nerves prior to the interview, which the singer described as “detailed and intimate.” “When I entered the studio, she (Winfrey) told me, ‘Don’t be [nervous]. This is your homecoming,’” she said.

Charice added that Winfrey, who introduced her to renowned music producer David Foster, made her comfortable throughout their chat. “It was sort of my coming out in the United States,” she said.

She also said that, off-cam, Winfrey hugged her and said, “I’m proud of you.”

“Where Are They Now?” features the current lives of different personalities who created headlines in the now defunct gab fest “The Oprah Winfrey Show.” The Oct. 19 episode will also 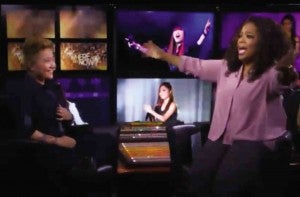 Asked for more details on Charice’s guest appearance, talent manager Glenn Aldueza said they were not allowed to talk about it further until after the interview aired.

Charice appeared four times on “The Oprah Winfrey Show.” The first time was on May 12, 2008, when she belted out Whitney Houston’s “I Have Nothing.” She returned on Sept. 9 the same year and performed Celine Dion’s “My Heart Will Go On” with Foster on the piano.

On May 18, 2009, Charice sang her debut North American single, “Note to God,” from her self-titled international album. The following year, on May 11, Charice was again given a spot in the show to do a live performance of her second single “Pyramid” with rapper Iyaz.