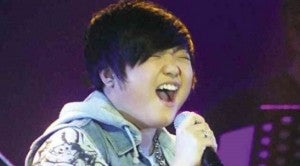 MANILA, Philippines–Has singer Charice Pempengco finally reconciled with her mother after she publicly admitted more than a year ago that she is a lesbian and had a girlfriend?

Charice posted Wednesday midnight on Instagram a picture of her with her mother, Raquel, and brother Carl.

Also in the picture was her girlfriend, Alyssa Quijano.

Charice was reported to have had a falling out with her mother after she decided to live in with Quijano, although Raquel had supported her daughter’s decision to publicly come out of the closet.

Charice, who uses the username “yanchomacho” on Instagram, had this caption in her posted photo: “Monthsary celebration with family. Also for the people who doubted and thought we would not be okay. Screw you all. Now please shut up, move on and let us live our lives as one happy family.”