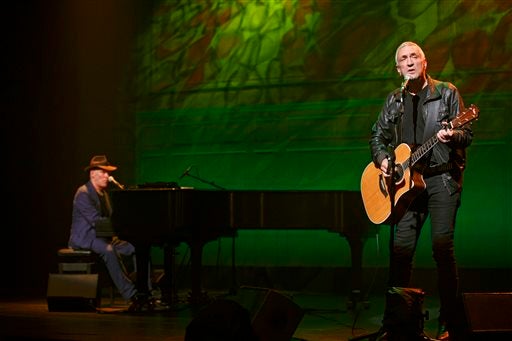 In this image released by Keith Sherman Associates, John R. Waters performs in “Lennon: Through a Glass Onion,” in New York. The show features 31 songs including “Imagine,” “Strawberry Fields Forever” and “Lucy In the Sky with Diamonds.” AP

NEW YORK— When John R. Waters first heard the Beatles on the radio as a teenager, he made more than one mistake.

He thought they were Yanks. And he suspected not all of them were male.

“They sounded like a Motown band and I thought there was a chick singer in there somewhere,” said Waters laughing.

The British-born, Australian-based Waters soon learned the truth, but it never stopped his adoration of a band that he says “changed the face of song-writing.”

Waters, an actor and musician, has gone further than most fans of the Fab Four — he’s now embodying one of them. He stars in “Lennon: Through a Glass Onion,” which has 31 songs including “Imagine,” ”Strawberry Fields Forever” and “Lucy In the Sky with Diamonds.”

The show features both songs and spoken word at different stages in Lennon’s career and the guitar-playing Waters — accompanied by pianist Stewart D’Arrietta — mimics Lennon’s voice but otherwise just tries to catch his essence.

“I didn’t want to be like an Elvis impersonator. I don’t dress up to look like Lennon but I do use the voice,” said Waters, 65. “I was 15 when the Beatles had their first hit and it was a big thing for all of my generation.”

Lennon, who would have turned 74 on Thursday, was killed in New York in 1980. “Lennon: Through a Glass Onion,” which takes its name from a track on the so-called “White Album,” makes its New York debut this month at the Union Square Theater. The show has the blessing of Lennon’s widow, Yoko Ono. 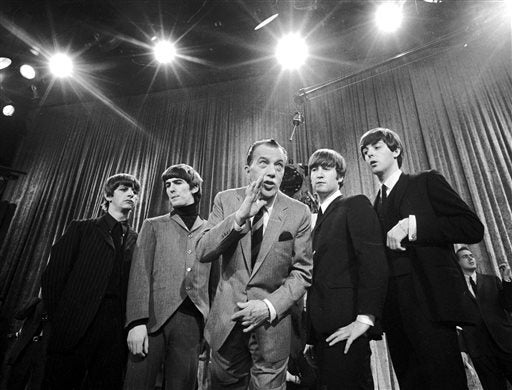 In this Feb. 8, 1964 file photo, Ed Sullivan, center, stands with The Beatles, from left, Ringo Starr, George Harrison, John Lennon and Paul McCartney, during a rehearsal for the British group’s first American appearance on “The Ed Sullivan Show,” in New York. AP

“We pull back the layers of the onion to reveal the core,” said D’Arrietta. “This stuff is such rich music. He was such a clever writer. He really was.”

Waters agrees, vividly remembering riding his bicycle to school and singing “Strawberry Fields Forever.” He marveled at its unusual chord sequence and structure. “It’s just a brilliant song,” he said.

Waters premiered the show with D’Arrietta 22 years ago at a hotel in Sydney. The pair toured with it on and off for years — including a stint in London’s West End — but never made it to New York until now.

It uses songs by Lennon — some co-written with Paul McCartney — as well as stories based on Lennon’s lyrics, which were often very personal. Waters tries to paint a full picture, not just a sugarcoated tribute.

“Oddly enough for someone so ironically famous, there are a lot of obscurities about John Lennon. That’s one of the things you discover about his life,” said Waters.