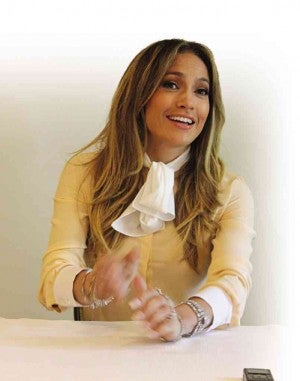 LOS ANGELES—“My aunt was gay,” Jennifer Lopez began her explanation as to why she decided to produce “The Fosters,” a TV series about a lesbian couple raising a multi-ethnic mix of biological and adoptive children.

“Her name was Mercedes Rodriguez,” continued Jennifer, dressed in a long-sleeved blouse and skirt, her fingers and wrists dripping with bling. “She was my mom’s (Guadalupe Lopez) older sister. She was the second of three children, and I was also the middle child. So my aunt and I had a special bond. She had just passed away from cancer when this project landed on my desk.”

“I thought this was something that would make her proud,” she said of the ABC drama she executive produces under Nuyorican Productions, her film and TV production company. “Mercedes struggled. She grew up in a time when it was such a shame to be gay. She tried to live her life in a beautiful way and tried to be proud. But I know there was always that thing inside that made her feel like she wasn’t as good, or was looked upon in a negative way, and that always hurt me.”

“The Fosters” actresses—Teri Polo, Sherri Saum and Maia Mitchell—joined Jennifer earlier in this interview (more about them in a future column).

Not shocking at all

Asked how she would react if someday her kids would tell her they’re gay, Jennifer replied, “I have grown up around it so much. To me, it wouldn’t be so shocking. I would be like, okay, all right. What are you going to do? You are going to love them through it, accept it and do the best you can to help and guide them.”

We talked to Jennifer a few days after she was in a car accident. Actress Leah Remini was driving the car with Jennifer, Emme and Max (her twins with Marc Anthony), and Remini’s daughter, Sofia.

“We got knocked in the back of the car with the kids and Leah’s daughter in the back seat, with our seatbelts on, thank God,” Jennifer said. “It just happened to be my new car. It’s the first-time luck you have when you take it out. I said, ‘Let’s take out the new car. We will go to Malibu. It will be so much fun.’”

“We were five feet from the restaurant we were going to and a guy just slammed into the back of our car. I swear, I thought a boulder fell on top of us. It was so scary. I got out of the car and started yelling and screaming because I was so frightened that the kids could have gotten hurt.”

The multi-hyphenate talent added, “Of course, my adrenaline was so high. My daughter started sobbing. It was really tough. The guy was driving drunk and he got arrested. We are all fine, thank God.”

At 45, Jennifer’s still got it and she flaunts it with Iggy Azalea in the video for their duet, “Booty.”

“I guess moms are not supposed to be sexy,” quipped Jennifer with a sly grin. “Heaven forbid that in our 40s, we express any type of sexuality.”

“It’s a fun song,’” she said of the video where the two stars shake up a storm. “To not have big booty in the video would have been not authentic. I think we did a good job. We had a lot of fun with it. People are responding to it. My next song is going to be a ballad.”

She teased, “I hope it doesn’t bore you since you really seem to like this one.”

Complimented about her youthful looks, Jennifer answered, “We have good genes to begin with. My mom and grandmother were very beautiful, shapely women. I work hard at it, too. Everything is earned. I feel like nothing is given to you. You have to work hard for it.”

The glamorous, perennial red-carpet favorite whose previous relationships included ex-husband Filipino-American dancer Cris Judd, described her current status: “I am single—(but) it depends on who I am going to meet in the hallway.” She laughed. 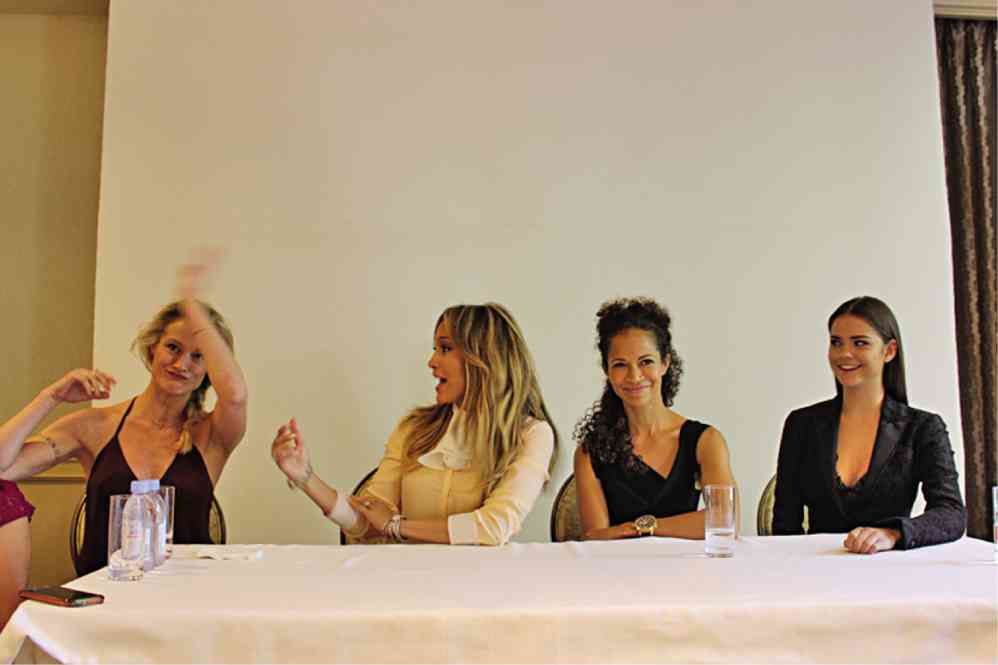 JLO, THE producer (second from left) and the stars of “The Fosters” (from left)—Teri Polo, Sherri Saum and Maia Mitchell—have a fun chat with the press. Photo by Ruben V. Nepales

“This is a great journey for me right now. I have gone from relationship to relationship. I have never shied away from talking about things but I do try to keep sacred things, sacred.”

“I am not ashamed of the path I have taken or the lessons I have learned,” Jennifer stressed. “I am human, I am a girl, I am a woman. I do what feels right in the moment. Right now, it feels good to just be on my own. I have some I-love-Jennifer time, which I haven’t done a lot in my life.”

She claimed, “I am not looking. I am just spending time with myself and my kids.”

On whether her friends try to set her up with men, JLo laughed again and replied, “They are, constantly, but I am just not there right now. It’s just not something that is a priority right now.”

“You just want to let them know they are loved,” Jennifer said about raising the 6-year-old twins, who live with her. “That’s the most important thing. I always tell them, ‘My daddy (David Lopez) is not here but I know he loves me. He visits me.’ I try to make it as good for them as I can.”

“They are individual human beings with their own specific set of feelings,” she described Emme and Max. “They know their mom loves them. I have two very happy, healthy kids.”

While there is no typical day in the life of JLo, she attempted to describe her “routine”: “Around six or seven o’clock in the morning, my kids come in and usually get in bed with me. We lie there for a little while. Then they run and eat breakfast. They get ready for school. I see them off to school. I get back in bed if I can for an hour. Then I get up. I do some e-mails and phone calls while I am in hair and makeup. I try to stay on time. I do my charity work for an hour or a day.

“Or I do some press for my record and then after that, I will go maybe to a doctor’s appointment. Then I will go back and hopefully make it home to have dinner with the kids. I always spend that time with them until they go to sleep. I will go work on some stuff until I knock off.”

Still on top after all these years, Jennifer emphasized that she followed her own instincts in her career moves.

“I don’t try to follow what anybody else is doing. I just do what my gut says and what feels right in the moment. I am not opposed to having fun, being silly, falling down, getting up, anything. I am open to the experience, for whatever comes. I try not to limit myself because of what anybody thinks— that I am a woman, that I am Latin, that I am of a certain age. I do what feels right for me.”