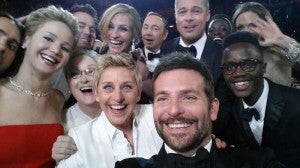 LOS ANGELES–Narcissism, isolation, control freakery: the deep impact of the Internet and social networks on our modern lives is coming under the spotlight in a new TV show and an upcoming movie this month.

TV show “Selfie,” which launched on ABC this week and the film “Men, Women and Children,” which hits the big screen later this month, both reflect the ravages wreaked by being constantly online.

The ABC network’s show depicts Eliza Dooley, who works in marketing but who is a social networking “superstar” due to her 263,000 “followers” on the Instagram photo sharing service.

She shares with them her every move, and posts pictures of every meal and herself in every state of undress. She measures people based on their “friends” or “followers” on the Internet.

But her life is upended when she finds herself a laughing stock online due to an unfortunate viral video.

“I’ve spent years laughing at stupid idiots on Instagram, and now the stupid idiot was me,” says Dooley, played by Karen Gillan of recent box office hit “Guardians of the Galaxy” fame.

To escape this online nightmare, she calls on marketing ace Henry, who tells her she has become pathetically dependent on “the instant gratification of unearned adoration of perfect strangers.”

“When Siri is the only one there for you, you realize being friended is not the same as having friends,” sums up Dooley’s plight.

The show has earned mixed reviews — the Hollywood Reporter said it “has potential despite cloying pilot” aired last Tuesday.

But it does broach some of the real problems of our ultra-connected society: the isolation of online life, the difficulty in real-life communication it highlights, the ubiquity of mobile devices at mealtimes or in the bedroom.

“Men, women and Children,” by Jason Reitman — who directed “Juno” (2007) and “Up in the Air” (2009) — depicts a well-known urban scene: a street packed with people, all with their heads down locked into their smartphone screens.

The movie, which comes out on October 17 in the United States, tells the story of a group of high school friends. One celebrity-seeking teenager finds herself exploited when naked photos of her leak online.

An anxious mother (Jennifer Garner) seeks to protect her daughter from sexual predators by going through every single of her texts, emails or Facebook posts. But it is an uphill task.

Technology is increasingly pervasive in the plots of any number of TV shows and films: think texting in “House of Cards,” geolocalization in “Earth to Echo” and recent thriller “November Man.”

Tom Nunan, a professor at the UCLA School of Theater, Film and Television, cites notably 1998’s “You’ve Got Mail” by Nora Ephron as prescient about the impact of email on our love lives.

“‘You’ve got Mail’ has only grown in affection and respect over the years, as people look back… at the time, people didn’t think it came at the level of ‘When Harry met Sally,’ but that movie has aged very well,” he said.

Smartphones we carry everywhere have become “our courage devices,” said the academic, adding that they allow people to “say things we would not have the courage to say face-to-face.”

The film is probably already being made somewhere, or at least planned.

The depiction of our increasingly online life seems likely only to grow in the coming months and years, on the small and big screen.

Read Next
Single Review: ‘Bang Bang’ by Jessie J, Ariana Grande, and Nicki Minaj
EDITORS' PICK
vivo brings to the Philippines a powerful smartphone with a slimmer body, the vivo Y02s for only PHP 6,499
Apple warns of flaw that lets hackers into iPhones, Macs
46% of schools nationwide to have full face-to-face classes on Aug. 22
House energy committee chair Arroyo bats for cheap electricity
What to watch out for when selecting a video surveillance solution
Heads may roll at BOC, says Palace if sugar smugglers are allowed to use recycled import permits
MOST READ
DepEd to give teachers P5K cash allowance within first week of classes
LOOK: Miel Pangilinan dazzles in glittery pre-debut shoot
DOJ indicts bank officer in $2.1 billion Wirecard fiasco
PH importing sugar after all: Marcos okays 150,000 MT
Don't miss out on the latest news and information.