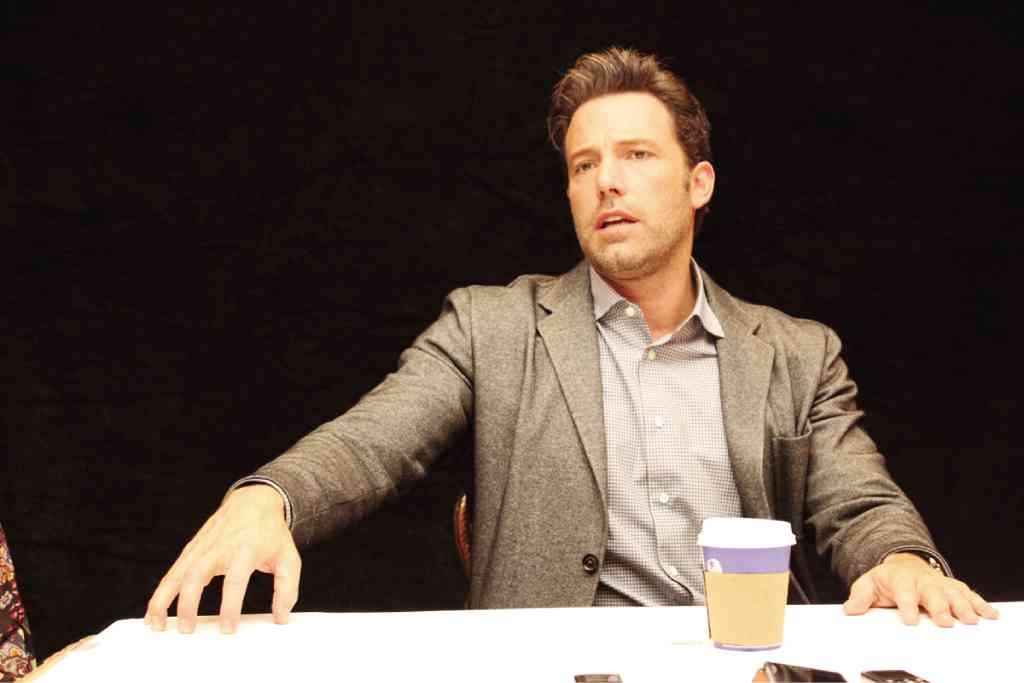 AFFLECK says he would like “to direct movies that I think are interesting and act in movies with directors that I can learn from.” RUBEN V. NEPALES

ANGELES—Ben Affleck’s bulked-up Batman physique was evident though he was all covered in a gray jacket and printed dress shirt during our recent chat at The Ritz Carlton New York-Central Park. The actor was nursing a cold—his voice was a bit hoarse—and he was tired from last night’s New York Film Festival premiere of “Gone Girl,” but he was his usual nice self.

Ben and Rosamund Pike are brilliant as Nick and Amy Dunne in David Fincher’s “Gone Girl,” which author Gillian Flynn herself adapted to the big screen. The deliciously wicked novel and movie of a marriage gone toxic finds the leads and the supporting cast in top form.

After Ben is done wearing the Batsuit in Zack Snyder’s “Batman v Superman: Dawn of Justice,” he will direct again and star in “Live by Night,” based on the novel of the same title by Dennis Lehane, followup to his crime novel, “The Given Day.” It is a tale of organized crime in the Prohibition era, and Ben said he was excited to direct a big period movie. He and Leonardo DiCaprio are among the producers. Zoe Saldana, Elle Fanning and Sienna Miller will also star. 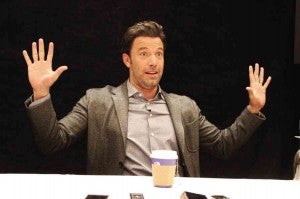 At 42, you’ve accomplished a lot. How do you top yourself?

I’m excited to direct (again, “Live by Night”). It’s something I’ve never done—a ’20s-’30s period epic. When you’re scared to do a movie, that’s the right one to do. I usually just make movies about people talking in rooms so this is very exciting. I’m getting the chance to dip my toe into different water.

David Fincher said it’s much easier working with an actor who is also a director, like you. What is it like for you as an actor being directed by someone like David?

It’s very easy to take direction from someone you trust. David has never made a bad movie and he’s made some great movies so I feel like I’m in very good hands.

I’ve chosen just to work with directors whom I really like and respect. I like to put myself in their care. When there’s a problem, I can just go back to my trailer and they can figure it all out. It’s a big relief.

At the Comic Con in San Diego, you looked very stern.

How grim is shooting “Batman v Superman: Dawn of Justice?”

“Batman” has a great script. It has a very talented director (Zack Snyder), a really strong, smart, robust and experienced studio behind it, so it’s very exciting.

Zack is always such a ball of energy. What is it like working with him?

Zack has more energy than anybody I know. He works as hard as anybody. He’s in the gym in the morning and storyboards every single shot, which is a huge amount of work. So everybody knows what’s going on. He’s got enormous visual talent. I stand there and he sets up shots. We do the blocking and…I see a shot from Zack and I think, I never would have thought of that.

He is so visually inventive so that’s quite pleasant. Action movies take a lot of days and involve a lot of stunts and visual effects—that combination and the story has its own challenges but I’m enjoying it.

What I’ve learned from Zack in the movie are the cutting-edge visual effects—what we’re able to do now and how you integrate that into a story. He’s very gifted. 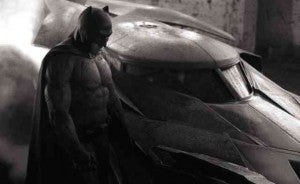 And what did you learn from David?

A ton. David has mastered both (artistic and technical) sides. He understands everything. He took me to watch him build the camera at the beginning, literally build it to show me the technical workflow.

He understands nuance, subtlety, performance and writing. I’ve not worked with a guy who has those things combined.

Do you see a sequel to “Gone Girl”?

Oh my God, I don’t think I can handle a sequel. It’s a very dark movie. I’m lucky because I have a lovely wife (Jennifer Garner) and as far as I know, she’s never been accused of killing anyone. So it really wasn’t about my life and I didn’t bring a lot of my life to it. Nonetheless, during the 110 days of filming a story where you’re like swimming through the mud every day, you come home and some of that mud is still on you.

Luckily, David is actually very funny and warm. So I was able to laugh and have a good time on the set. Otherwise, it could have been unremittingly grim. One of the nice things was that we shot mostly in Los Angeles so I was able to come home and see my family every day rather than being off somewhere being miserable and obsessing.

With so much going on between your characters, how did you and Rosamund work together?

Rosamund is brilliant. This is the part of a lifetime. Parts for women are just so rare anyway. Then, to be the center of this complicated story and get the chance to make the transition that she makes, she does so convincingly. From the “sugar” in the beginning to her scene with Neil Patrick Harris, she’s taken quite a turn.

We had a different (working) relationship. I didn’t want to get too close to Rosamund when we were shooting the romantic scenes. We would banter and chat. I would ask her about her life, past boyfriends, parents—that kind of thing.

The night when we were doing the “sugar kiss,” we had wonderful talks about her relationships, mine, life, love…most of the time, we maintained a distance because this is about two people who are at a real distance. That happens in a marriage when you have like two positive magnets that don’t want to connect. We tried, maybe subconsciously, to replicate that.

Also the truth is, David keeps you so f—ing busy. You hardly have time to talk to anybody but Rosamund did something really masterful in this movie: She made her character seem real and approachable, then took her to a place that was very extreme, and you still thought this seems like a rather unusual person, but real. I admire her greatly. It was a pleasure to watch her put that performance together, piece by piece.

About that shower scene…
What would you like to know?

Were both of you really nude?

I didn’t quite realize that until I saw the movie…quite literally and metaphorically, this was like a more European type of movie. David said, “There can’t be vanity. There can’t be bashfulness.” 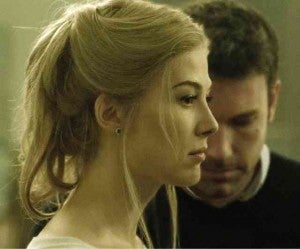 ROSAMUND Pike has done something “masterful…she made her character real but unusual,” says the Oscar winner.

We can’t be sitting in bed with the sheets covering the nipples like in a soap opera. It has to just be like who our characters are. You have to look like s–t and just ate donuts, puffy-faced and have a hangover.

David didn’t want us hiding ourselves; he didn’t want us making excuses for our characters and winking at the audience and saying, I’m really not like this. So, yeah, that included doing some mild nudity but at the end of the day, I am just too old to get too bent out of shape about it.

Where do you think you are now in your career? What still drives you?

I’ve had a nice run over the last 10 years despite sometimes getting the ups and downs. From “Hollywoodland,” “Gone Baby Gone,” “The Town,” “Argo,” “Company Man” to “Gone Girl,” I’ve spent time working on material that I thought was rich and fertile. It’s been satisfying to me personally. I feel that, at 42, I’m in my prime as a storyteller. I’d like to direct movies that I think are interesting and I want to act only in movies with directors that I can learn from.

I’m not in any great rush.

I have the freedom of not judging myself all the time. I feel like I’m scrabbling at the ladder. You go up, you go down. When a movie works, you’re a hero; if it fails, you’re a goat. That’s the nature of this business. You have to embrace it. It keeps you working and it keeps you going uphill.

My children are 8, 5 and 2. Those are formative years so I want to try, without abandoning work, to find ways to make sure that I’m around. So they don’t write autobiographies down the road and say my dad was never around.