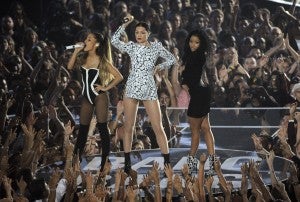 Ariana Grande, from left, Jessie J and Nicki Minaj perform at the MTV Video Music Awards at The Forum on Sunday, Aug. 24, 2014, in Inglewood, Calif. AP

This has to be one of the most ambitious collaborative efforts I have heard in a long time. It has a power trio representing arguably the most popular mainstream female artists we have now. Jessie J leads the pack here, as “Bang Bang” is the lead single taken from her upcoming studio-release ‘Sweet Talker’.

The English Pop singer Jessie J is joined on board by R&B lite queen Ariana Grande, and the incomparable American rapper Nicki Minaj.

But will the star power of “Bang Bang” be enough to make this single shine above the rest ?And will the level of talent these three artists have be fully utilized to make this one of those rare team-ups live up to the hype ?

Those questions will be answered below.

What is the overall production value of “Bang Bang” ?

Primary producer Max Martin went for a bouncy pop single with a “soulful sheen” on it. Which reminds me, the trend of releasing pop singles with a “strong nostalgic factor” in them relating to the mid-70’s-to-early-80’s sound is one of the biggest crazes now in terms of production value.

And even though some may view this approach as another trendy style in putting together records, I can see the bigger picture here, as it effectively adds a more organic sound in a majority of these pop singles being currently released, and that is a huge plus factor.

Some may wonder, how are you going to fit in three sizzling hot artists in one track without any of them overshadowing the other?

Producer Max Martin and his co-producers knew how. They handled this one with extra care and detailed attention. They first gave the singers, Ariana Grande and Jessie J, each a verse of their own to showcase their impressive vocal chops. And the toned down–and yet still very eccentric rapper–Nicki Minaj has her solo moment to shine also wherein she gets to deliver some serious rhymes in a way only she can.

In my book, this single did live up to the hype and delivered the goods big time for the respective fans of these three female artists. Well done, ladies.