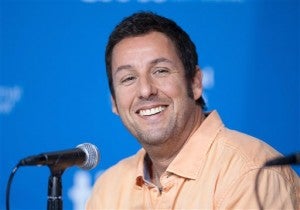 In this Sept. 6, 2014 file photo, actor Adam Sander smiles during a press conference for “Men, Women, and Children” at the 2014 Toronto International Film Festival in Toronto. Sandler has signed a deal with Netflix to star in and produce four films for the streaming service. AP

NEW YORK — Adam Sandler has signed a deal with Netflix to star in and produce four films for the streaming service.

Netflix announced early Thursday that it has landed one of Hollywood’s biggest comedic stars in its growing push into original movies. The films will premiere exclusively on Netflix.

In a statement, Sandler joked that he agreed to the deal for one reason: Because “Netflix rhymes with wet chicks.”

With films that have collectively grossed more than $2.4 billion domestically, Sandler has long been a major box office draw. His last film, though, the romantic comedy “Blended,” sputtered with a total of just $46.3 million.

The deal follow’s Netflix’s announcement that it will stream a sequel to 2000’s “Crouching Tiger, Hidden Dragon” in August when the film simultaneously opens on Imax screens.

Adam Sandler Plays the Dual Roles of ‘Jack and Jill’