The girl who would be Kim | Inquirer Entertainment
Close
menu
search

The girl who would be Kim 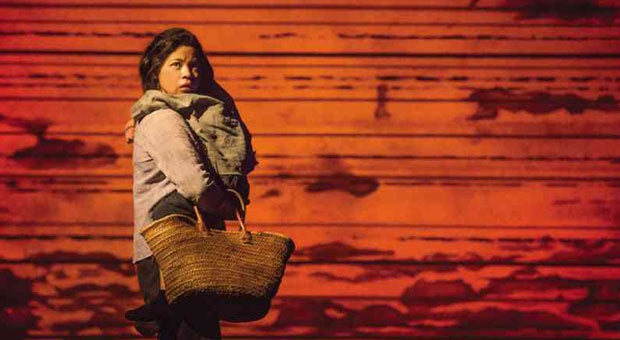 EVA NOBLEZADA did a lot of character analyses on Kim, “to color her personality, culture and background.” photo by Matthew Murphy

ZAGREB, Croatia— And it has happened again. Twenty-five years after the first worldwide search for Kim in 1989, for the original production of “Miss Saigon,” another one was held to find another young lady to play that same role for the revival of that same show. The list of similarities between the two young ladies is eerie. To start with, they are the same height (5’ 3”) and share the same zodiac sign (Pisces) and a love for video games.

The young lady in the original production is yours truly; the young lady in this new spectacular revival is Eva Noblezada. She is 18, ebullient, articulate, outgoing and intelligent, and currently wowing audiences in the West End as Kim in “Miss Saigon,” playing at the Prince Edward Theatre.

Eva was born in San Diego, California, close to Sea World and the beach. “I would stay with my Lola and Papa for a few days and have adobo and papaya, then head down the street to my Nana and Tata (Mexican grandparents), who made me burritos.”

She and her family moved to Charlotte, North Carolina, when she was around 6. It was here that she was first exposed to musical theater: She got into Northwest School of the Arts, which she attended until she was 17.

It wasn’t the first thing she tried her hand at. “There was a time when I thought I’d be a professional basketball player. Then there was BMX, volleyball, paintball … the list goes on! I dream of being a professional baker, with my own line of desserts and recipes that would knock Betty Crocker off her cane!” 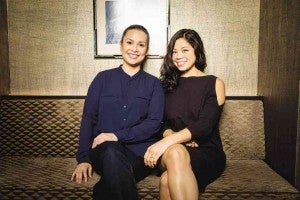 THE AUTHOR (left) and Eva on the day they met in London, where it all started for both photo by MATT CROCKETT

New York casting director Tara Rubin found Eva during the Jimmy Awards, a high-school musical theater competition. (The year that Eva competed, it was held at the Minskoff Theater in New York). She performed “With You” from “Ghost the Musical.” Strangely enough, Tara Rubin was the casting director of that musical. “Tara set up my first audition with Laurence Connor (‘Saigon’ director) and Stephen Brooker (music supervisor), and it all went so fast from there!”

Her final audition was at the Majestic Theater, home of “The Phantom of the Opera,” in the presence of “Miss Saigon” producer Cameron Mackintosh. “I sang ‘I’d Give My Life for You.’ I was shaking, but once I started singing, I let everything go.” When she was done, Cameron called her down to the orchestra section where he was seated, sat her down and asked, “How would you feel about moving to London? We’d like to offer you the role.” She broke down in tears.

Once she started working on Kim, she pulled out all the stops with her research and creation of this tragic character. “I did a lot of character analyses on Kim, which I used to color her personality, culture and background. I believe her religion was Caodaism, which is sort of a mixture of beliefs following Jesus Christ, Confucius, Buddha and Victor Hugo. Her favorite color was blue, and [as a child] she took long walks with her father. Little quirks like that helped me get in tune with her and make Kim 100 percent my own.”

There were, of course, the graphic videos on the Vietnam War—interviews with American soldiers who said they didn’t know what they were fighting for, women selling themselves on the streets to feed their children. “This was real life. My uncle works in the Air Force in Afghanistan, in charge of stocking the ammunition department. It wasn’t completely new to me.”

Eva is growing up in a world where war is a devastating reality. “With Iraq, Afghanistan, Syria and hostage situations … it’s crazy, it’s heartbreaking. It’s fresh; everyone knows about it.” This, she feels, is what makes “Miss Saigon” totally relatable. “The story is valid pretty much anywhere. It gives the show a punch to the stomach.”

“Miss Saigon” is not just a story of war, however; it is a love story with the Vietnam War as a backdrop. And with love stories come, well, love scenes. “It was a little awkward at first having met Alistair (Brammer, who plays Chris) only once before rehearsals. At one point, I think Laurence started seeing our relationship as more like siblings, which was really odd.”

How did Laurence turn the “siblings” into “lovers”? “Laurence took us into a room, just the three of us, and asked us to ‘discover each other’ aka ‘make out in front of our director.’ We did!” Laurence also had the two speak the lyrics of “Sun and Moon” to each other. “It was very loving, romantic.”

Eva has no plans at this time to attend college, but she is living the college experience with her time in London, what with living on her own for the first time. “My mom was going to stay with me up until opening night, but after two weeks decided to go back home!” Missing her family has been the toughest thing about the move, but she is enjoying her independence. “It’s nice to live in my own home, buy my own clothes and furniture. Living the adult life is fun, but comes with many responsibilities.”

Though she loves London, she is pulled by thoughts of home. “I miss how cold it gets and how green it is. I miss fried chicken and southern biscuits. I miss listening to the same song 1 million times on the way to the mall with my best friend.”

With all the glowing reviews Eva has gotten for playing Kim, she is officially a West End star. She doesn’t see herself that way, though, especially after interesting encounters with other

stars in London. “I’ve met a lot of people whom I looked up to, but then see how vain and self-absorbed they are. They talk about money and it’s all ‘me, me, me, me.’ How can [they] give their all to a craft if they are caught up in that?”

Thankfully, Eva’s main influences in life (her parents and auntie Annette Calud-Staudinger) see to it that her feet remain on the ground. “My parents taught me what real love is. They love me even when I make stupid decisions, and never fail to support whatever I do. My auntie is a second mother, vocal coach, boss and mentor. She spoils me to the moon and back and I love her very much!”

Annette was a member of the Original Broadway Company of “Miss Saigon” in 1991 and got to play the role of Kim as well.

If there is anything that Eva’s “Miss Saigon” experience has given her, it’s inner strength. “I’m more in tune with myself now. I’m not thin or tall. That’s how God created my body. I wanted to be the best Kim, but I compared myself with so many others, which made things difficult for me. I had trouble letting my own Kim break free.”

Thankfully, she has the support of the cast, her family and friends, and has realized that what other people had to say should not have any effect on her performance. “In the end, I found some ground. I couldn’t care less what a**holes have to say about it. We aren’t doing it for them.”