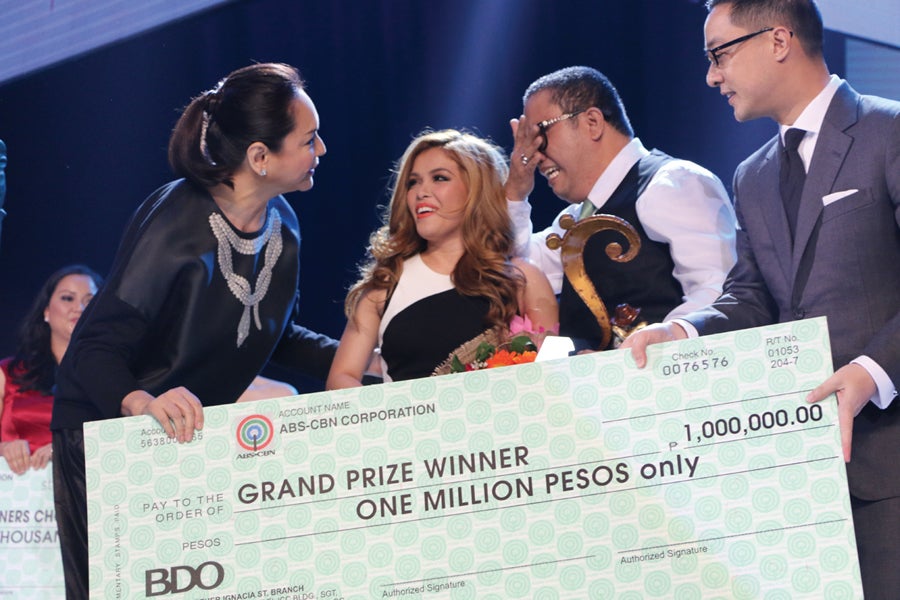 “You fail when you stop trying.”

Edwin Marollano had tirelessly joined songwriting contests since 1985, but his first taste of victory came only last Sunday, at the Smart Araneta Coliseum, where he was declared grand winner of this year’s “Himig Handog: P-Pop Love Songs” tilt.

“I’m not a quitter—the more I lose, the more determined I become. I knew that I would win one day… and I did, at last,” Edwin told the Inquirer shortly after the program.

His unwavering resolve was fueled by a desire to share his talent. “I just set out to use what God has given me,” said Edwin, whose previous best performance in a competition was making it to the finals of PhilPop 2012.

P1 million and a trophy.

“I wasn’t expecting this at all because the other entries were good,” he said. “Then my name was called; I just lost it!”

Edwin’s interpreter, KZ, was just as ecstatic. “I was up very early because I was so nervous! It was as if I was competing in

“Mahal Ko o Mahal Ako,” a weepy, piano-driven ballad, was inspired by a friend’s personal experience, Edwin related. “I ended the song with an open-ended question to make the listeners think,” he said, adding that he let KZ add flourishes to it. “I just told KZ to take it where her heart led her. I appreciate her delivery,” he said.

Edwin noted that his songwriting is not limited to love songs, and that each of his works is bound by positivity. “I make sure that they encourage the listeners.”

“Himig Handog” head Jonathan Manalo, a past winner, said 80 percent of the scores were based on technical aspects: lyrics, melody and production value. The remaining 20 percent was based on performance quality on finals night, as determined by a panel of judges composed of ABS-CBN