Believable, empathetic characters in ‘Wish I Was Here’ 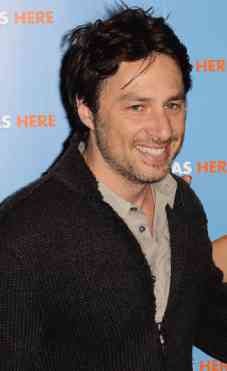 The current film, “Wish I Was Here,” is one of those movies whose title says it all: The film is about a 40-ish actor (writer-director Zach Braff) whose life is a shambles, because he still hasn’t learned how to live up to his responsibilities as an adult, husband and father.

He keeps auditioning for roles but gets to act only occasionally, so his wife (Kate Hudson) has to work at a thankless clerical job just to keep food on the table.

Their two kids’ education at a good Jewish school is being subsidized by their paternal grandfather (Mandy Patinkin), so the wolf of desperation is being kept at the door.

However, the jobless actor’s flimsy house of unlucky cards teeters and falls when his father sadly reveals that he has cancer and can no longer pay for his grandkids’ schooling, due to rising medical costs.

Suddenly left in a financial lurch, the “inactive actor” is finally forced to confront his problems—and belatedly try to solve them in an adult way (which he should have done a decade ago).

Thus, “Wish I Was Here” shapes up as a “delayed coming-of-age” film, making it cautionary viewing for many middle-aged man-children out there (as well as for their hurting family members).

Braff’s film has many plus factors, but its best suit is its seemingly “off-the-cuff” and natural projection and progression—nobody in front of the camera seems to be “acting,” the movie’s characters are just living their lives in full, public view, no art or artifice at all.

Now, actors know that this can’t really be, that the film’s cast members are in fact working very hard to create believable and empathetic  characters—but, they’re so good at what they’re doing that—it doesn’t show!

People who believe that “true art should hide itself” would therefore give “Wish I Was Here” high marks for thespic prestidigitation—a very hard act to pull off. Kudos to star-director Braff and his lead players for the amazing “movie magic.”

However, the film falters on point of scriptwriting, with some incidents ending up in relatively unproductive cul-de-sacs, from which the movie has to awkwardly extricate itself before moving on to better, clearer things.

An example of this is the series of scenes shot “on the lam,” with dad and the two kids he’s now been forced to home-school taking a long car trip to an obscure spot in the desert—where, as a youth, he had had a personal “epiphany” that never really ended up making sufficient psychic and thematic sense for him to live the rest of his life purposefully and well.

We know what this suite of scenes is supposed to thematically accomplish, but its execution begs and even beggars the question.

Happily, the unproductive interlude soon passes, and we can more productively  enjoy and learn from the cast’s insightful portrayals, which effectively take us deep into the collective heart of a wounded family —that finally achieves its own healing!