One sweet night with Boyz II Men in Manila 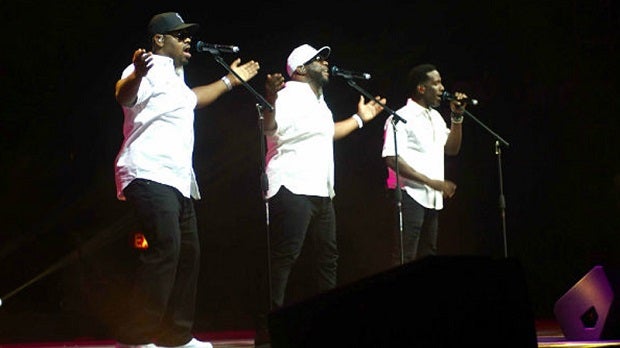 MANILA, Philippines—Leave it to Boyz II Men to show its Filipino audience what throwback really means.

The American R&B group, that rose to fame in the early 90s, made its way back to Manila on September 17 on what would be its fourth visit to the country for a one-night only concert. Perhaps the boys—now grown-up men, actually—probably wanted a no-frills performance, explaining the absence of a band and other fancy engineering to back their show up.

But what they lacked in visual spectacle, they made up for in pure, unadulterated smooth-smooth-rhythm-and-blues performance.

I kid you not. The 90s kid in me, it seems, has made its way to heaven and back.

“We hope you enjoy the show,” Shawn’s voice reverberates inside the densely packed Smart Araneta Coliseum, swimming in the shrieks of millennials—the age bracket that most probably grew up listening to their songs–that was making up the majority of the audience. 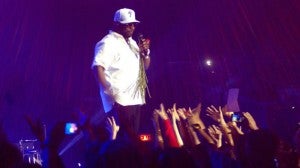 Throughout the show, B2M would be repeating the same words, sounding more and more like a cautionary statement given how bare the stage was during the concert. But their musical styling was all it took for the crowd to go wild. The men, composed of tenors Shawn Stockman and Wanya Morris and baritone Nathan Morris, opened their set with a medley of fast songs from their earlier albums, followed immediately by an electrifying performance of “On Bended Knee”, an original Boyz II Men song that stayed at number one in the Billboard charts for more than a month.

Shawn, the tall, lanky one-third of the group, took the stage once again to talk to the crowd as Nathan and Wanya readied themselves for the next set. “It’s been a couple of years,” he says to everyone. “We missed you. It’s been nothing but love. Thank you for believing in us,” he added.

He introduced the other boys, and while their physiques displayed the effects of ageing, their voices, both individual and collective, are still strong and powerful like the first time the world got to know them in 1991.

They performed a couple of songs from their Cooleyhighharmony album and called it an ode to the groups that came before them and helped influence their style. They sang “Please Don’t Go Away” coupled with some slick, unified 90s R&B dance moves that are very reminiscent of performances from New Edition and Silk. While the group performed, their music videos were played on the seemingly malfunctioning LCD screen on stage, but nobody seemed to care.

Boyz II Men also sang “Uhh Ahh”, another chart-topper song of the group, which many may associate with Beyonce as it was sampled in her 2011 hit “Countdown.” The men then followed it with a searing rendition of “Four Seasons of Loneliness,” their first hit single from their 1997 album Evolution. Nathan’s very, very deep baritone voice would boom once in a while, telling the crowd to join in the singing and dancing. 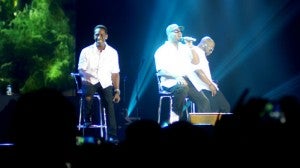 “If it weren’t for Motown, there will be no Boyz II Men,” Shawn speaks again on behalf of the group. They performed a medley of Motown classics as homage to the iconic record label that has been their home for years. It is worth noting that Boyz II Men was the last group to have a number one hit under Motown records

They proceeded to sing “Colour of Love,” probably the only hit song from their 2002 album Full Circle, and “Water Runs Dry” and “I’ll Make Love To You,” both from their 1994 album II, which is arguably their best-selling and most-awarded album to date.

The trio surprised the audience by giving away roses to the crowd, which sent women of all ages scrambling towards the front row of the patron area for a chance at taking home one of the flowers the men were holding.

The group also sang their Babyface-produced hit song “A Song for Mama,” which they dedicated “to the most beautiful and precious woman in the world.”

The men gave a very special a cappella performance of “Yesterday” because, as they said, they don’t always come to the Philippines. Devoid of any musical accompaniment, it was the show’s definitive proof that told the audience they still had it and that their voice could still kill, figuratively that is.

This highlight performance segued into another Boyz II Men classic chart-topper, “End of the Road,” appropriately lined in their setlist as it signalled the end of their show.

The Boyz II Men concert would just not be complete without an encore. After minutes of chanting loudly for the men to come back on stage, the crowd went wild once again when all three went up and performed a couple of songs, with Wanya busting some almost-forgotten 90s moves such as The Running Man and The Carlton.

They then thanked the Filipino audience for their support, even extending their hands to high-five some of the audience before leaving the stage altogether.

Soon as they left the stage, “One Sweet Day” played on the speakers, leaving the audience singing along to the tune as they made their way to the exits.

Crackling speakers, weird spotlighting, and a malfunctioning screen just did not diminish the crowd’s love for the group and their music. It has been one sweet day for everyone inside Smart Araneta Coliseum indeed—or should I say, one sweet night.

Read Next
Believable, empathetic characters in ‘Wish I Was Here’
EDITORS' PICK
New Year, New Rediscoveries
WHO says fabric facemasks still work against virus variants
1,797 more Covid-19 infections raise PH active cases to 33,603
UP president challenges AFP claim on Reds’ campus infiltration
Is your company a growth champion? Stand up and be recognized!
Acer Philippines welcomes you to its first flagship store
MOST READ
Wife stabs husband after seeing her younger self in old photos, thought he was cheating
NBI files raps vs top execs of 2 tech firms
Ate Vi’s message to those against ABS-CBN’s franchise renewal
UK Covid-19 variant already detected in PH as early as Dec. 10, says expert
Don't miss out on the latest news and information.