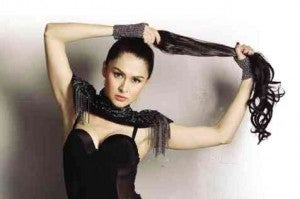 Marian Rivera’s new dance program was launched with great fanfare some weeks ago, but its subsequent telecasts (except for the one in which Dingdong Dantes proposed to her) have been decidedly underwhelming.

Other local dance programs in the past made it a point to establish its lovely hosts’ “credentials” by showcasing them in impressively difficult production numbers—but, Marian and her show have chosen to take a relatively more laid-back and even lazy approach, so the new production definitely hasn’t risen to the terpsichorean challenge.

Yes, Marian is truly lovely and seductive, but those plus points quickly diminish in value when viewers realize that the star isn’t pushing herself to the limit, despite her fervent declarations to the contrary.

The production’s strategy of choice now appears all too clear: Showcase its star in a long and impressive opening number, then shift the focus and hard work to guest dancing luminaries who can perform tougher routines than she can, then end with another attention-calling flourish.

That’s great for the supporting artists, but makes Marian come off as less than truly stellar—not a good outcome for a star with so-called “dance diva” ambitions dancing in her mind.

It takes a lot of rehearsals and just plain hard work to come up to credibly “dance diva” level, and Marian may not want to work that hard. If so, viewers’ expectations shouldn’t be unrealistically pushed, and all talk of “diva” status should be summarily downplayed.

Diva or not, Marian needs to work on some aspects of her performance as a dancer, including the rather basic one of not looking at the floor when she’s performing, which she has the occasional habit of doing on her show.

In addition, she resorts to performing too few actual dance steps and too many flirty or sexy poses. —And male dancers keep raising her up in the air too many times, for “exciting” effect, making viewers wonder why they are doing so much of the choreographic work, instead of the show’s star?!

Will the new dance show improve, as it should? Not if its star and production staffers continue to think they can get away with so-so work, and that local viewers are happy with nominal efforts, instead of genuinely dazzling and spectacular dance moves —as befits any TV dance showcase worth its salt!