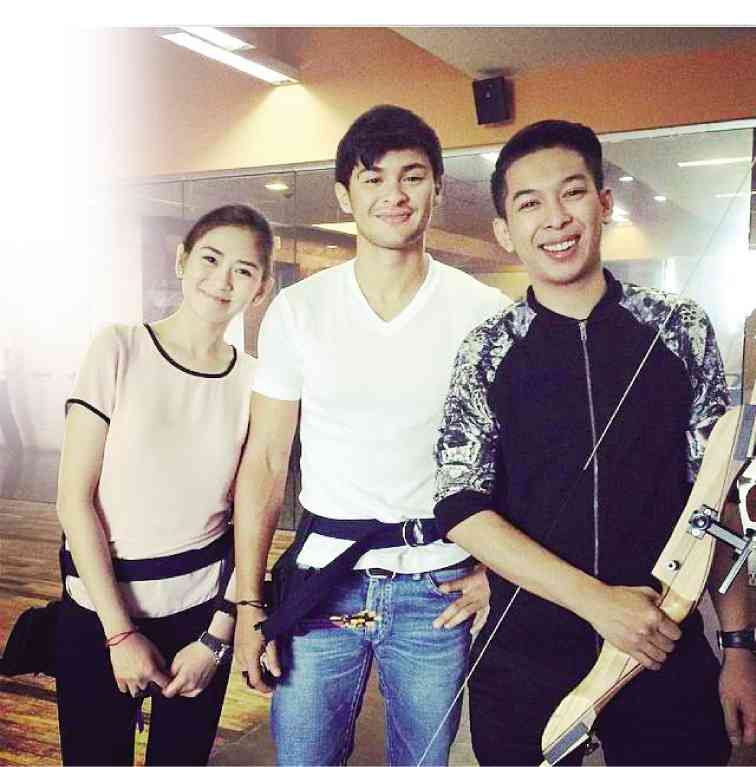 While filming “Shake, Rattle and Roll 15,” my dalaGay IC Mendoza mentioned to costar Matteo Guidicelli that he’s into archery. Matteo’s eyes lit up and said that his girlfriend, Sarah Geronimo, had long been wanting to try the sport.

IC took them to Gandiva Café and Archery Range, at One Corporate Center along Julia Vargas in Pasig.

Many other celebs frequent the place, including Richard Gomez, Victor Silayan and Bangs Garcia.

When IC posted his pic with Matteo and Sarah on his Instagram account (@ic_mendoza), the story was immediately picked up by media.

Gushed IC, “It was the first time that this cute couple tried shooting arrows. Sarah was like Katniss Everdeen of ‘The Hunger Games’ and Matteo, Robin Hood. For beginners, they are quite good.”

The cool Bismark brothers, Vas and Chad, welcomed them to Gandiva and encouraged them to practice there regularly. After their first archery session, they enjoyed a vegetarian lunch in the resto at the same venue. But even if Sarah and Matteo fail to master archery, they have already been hit (bull’s eye!) by Cupid’s arrow.

Since it happens to be my birth anniversary today, I can’t help recalling the time when Derek Ramsay sent a surprise during my party at 7th High two years ago.

Now that he is embroiled in a controversy with his ex- wife, Mary Christine Jolly (about child support for their son Austin), I sent him a text message to express my support.

His reply: “Dear, thanks for believing in me. I will not speak ill of the mother of my son… I will fight as hard as I can to be a good father to Austin. It breaks my heart that he is going through this. I want a relationship with him like the one I have with my father. I want him to see me as his best friend.”

“Papa” Derek is raring to be an “Ulirang Ama” to his unico hijo.

The classic tale “Ibong Adarna” is given a new spin in Gurion Entertainment’s “Ibong Adarna, The Pinoy Adventure” (opens Oct. 1). The legend is so popular that even Dolphy gave it a comic twist in “Ang Hiwaga ng Ibong Adarna” (1972).

The well-loved story of a magical bird that can sing away everyone’s troubles deserves to be retold with a new set of stars, costumes and treatment.

If you could be a bird, what kind would you be?

I’d be an eagle, so I could fly high and stay free—and be swift and dangerous at the same time.

How has your concept of “Ibong Adarna” changed after shooting the flim?

“Ibong Adarna” was introduced to me when we came back to Manila after living in Singapore for 10 years. I spent hours after school taking extra classes in Filipino. So “Ibong Adarna” and I had a bad start. Our film tells the story to a younger audience in a fun and adventurous way, while remaining true to Filipino values.

When the right time comes, how would you propose to Lovi Poe?

Of course I will make sure to plan it way ahead… to make sure we are both ready.

ABS-CBN president and CEO Charo Santos-Concio was recently declared Asian Media Woman of the Year by Content Asia, an information resource that covers the entertainment media industry in the Asia-Pacific region.

She was cited at a gala dinner dubbed “Great Stories … and the Women who Tell Them Best.”

The splashy event was held at the Grand Hyatt Singapore on Sept. 3.

Keep those interesting stories unraveling. We are all ears!