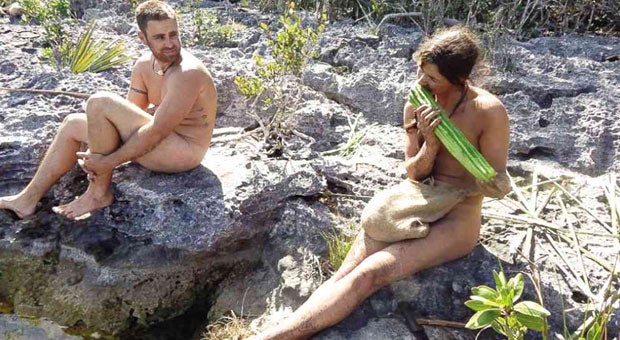 “NAKED and Afraid” fields a veritable modern-day Adam and Eve unceremoniously cast into a neo Garden of Eden. DISCOVERY

There are two “survival” shows on cable TV, “Naked Castaway” and “Naked and Afraid,” that some viewers may dismiss as exploitative ploys to draw their lurid attention, because they both feature participants who disport themselves completely in the buff.

Initial appearances are deceptive, however: In both programs, the contestants’ privates are masked, so voyeurs are quickly turned off and disenchanted.

It turns out that both shows are serious about showing how urbanized people would fare if they’re dropped into a completely unpopulated and uncivilized environment, not just au naturel, but with nothing at all—no tools, no way to start a fire or fish or hunt, no food or drinking water, no protection against the elements—nada!

They’re given a specified number of weeks to make it on their own—or to give up and ask for instant succor, by way of a helicopter that’s waiting for them to throw in the proverbial towel (if they have one)!

“Naked and Afraid” fields a team of male and female, a veritable modern-day Adam and Eve unceremoniously cast into a neo Garden of Eden, with no assurance of even fruits for sustenance.

Since they’re a pair, the couple have the advantage of helping each other solve problems, but they could also end up as each other’s worst enemy—if they don’t get along! And, in the harsh and unforgiving isle that is their constricted and constricting universe, the latter turns out to be more often the case!

So, even if romantic and sensual notions are allowed to be entertained by the show (they aren’t), fat chance that this couple will end up getting turned on by one another! Truth to tell, they’re simply too busy scrounging around for anything to eat, protecting themselves from the harsh elements—and starving!—to even care.

As for the other show, “Naked Castaway,” there’s only this single Adam, so he has nobody to turn to other than himself. That makes his lot in life much lonelier—but also simpler and less potentially combative.

His biggest foes turn out to be hunger, despair, illness and loneliness—not necessarily in that order. We learned a lot about human nature from viewing “Naked and Afraid,” but it was “Naked Castaway” that taught us the most powerful life lessons, thanks to our Adam, who was unusually perceptive and insightful in the reactions and thoughts he shared.

He taught us how absolutely important the things we take for granted can be—like fire. It took him many days to finally light a spark that he painstakingly built up into a flame that enabled him to cook and roast the worms and fish he was able to scrounge up

—and his existence and outlook improved tremendously!

His most amazing good fortune came when he found a goat trapped in some brambles, and he survived—and thrived—on its meat until his ordeal ended.

That was the most powerful lesson the show taught viewers: Yes, believe in yourself and your problem-solving and survival abilities—but, also believe in miracles, because they do happen!