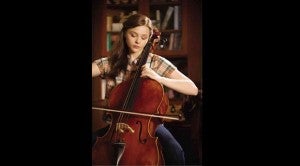 Teen and young-adult viewers empathize strongly with the current film, “If I Stay,” which is about a teen cello prodigy who unexpectedly finds herself falling in love with a rocker.

More than just a breathlessly palpitating love story, the film is a celebration of music in its varied forms, and thus is a welcome departure from the popular cinema’s desultory norm.

In our view, it should be seen by young and young-adult viewers because it’s an all too rare opportunity for them to be reminded of the importance of the arts in their lives, even in their affairs of the heart.

After a while, however, the film takes a major plot turn that enables it to examine and vivify an even wider range of themes and subjects, all the way to the importance, not just of love and the arts, but of life itself: Mia’s (Chloe Grace Moretz) family is involved in a major accident that turns their very existence upside-down, and inside-out.

Mia has an out-of-body experience that initially shocks and mystifies her—until she realizes that she’s actually in a coma due to severe injuries suffered in a car collision—and that her loved ones are even worse-off.

Not quite dead but not really alive (if we can imagine such a state of being), she bittersweetly recalls incidents in her life with her parents and younger brother, and seemingly “ordinary” incidents become seminal and momentous.

The impending loss of her entire nuclear family tempts her to give up on her own life, as well, except for the presence of her rocker beau, Adam, and her close family and grandparents. Is their love enough for her to want to go on living?

The film posits this key question so provocatively that it challenges viewers to put their own values system to the same test. Thanks to the involved and involving portrayals turned in by the movie’s leads, the empathetic exercise ceases to be merely theoretical, and our own emotions are enlighteningly engaged.

We end up arriving at a deeper appreciation of the people we love, our own families and friends, and of the importance of life itself and taking full advantage of the opportunities it offers us to be truly loving and human.

Sadly, this upsurge of illuminating feelings is coopted in part by the film’s excessively facile and idealized ending, which clutches too frantically at the hollow straws of a slap-happy denouement.

Still, the believability of what has happened before enables the movie to end up as a good viewing experience, despite this penultimate glitch.

“If I Stay” is a starmaking vehicle for Moretz, who comes into her own as a female film lead viewers can feelingly empathize with. It’s a big break for her, after years of TV-film acting, and she’s ready for it, thanks not just to her talent and softly charismatic beauty, but also to her obviously exceptional work ethic.

Her particular character in “If I Stay” has the additional obligation of being believable as a young cello virtuoso, and Moretz fully passes muster in this regard, because she doesn’t just come up with a deeply insightful portrayal, but her “virtuoso” cello playing is also beautifully believable—the result of weeks and even months of assiduous rehearsals, we’re sure!

Read Next
Spotlight on Noelle Cassandra
EDITORS' PICK
Notice of 2020 regular meeting of stockholders June 18, 2020
SM prepares for ‘safe malling’
Leveling up your ‘lutong bahay’ with the kitchen companion you never knew you needed
NBI, Immigration to join hunt for ‘underground’ medical clinics
2 Chinese nationals arrested in raid on another unlicensed COVID-19 hospital in Pampanga
P2.2 trillion in losses: Cost of COVID-19 impact on PH economy
MOST READ
Revillame tells Roque: ABS-CBN is in my heart despite being in rival network
NCR is ready for GCQ — Palace
LOOK: Robredo, Vico Sotto, check Community Mart ops in Pasig
Año: Quarantine passes not needed in GCQ, movement restricted to essential travel
Don't miss out on the latest news and information.