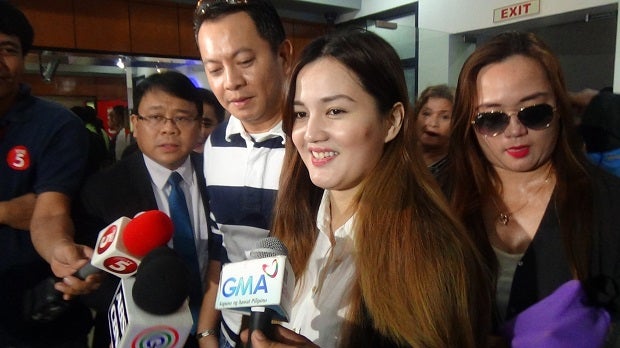 Cornejo secured her temporary liberty when Taguig Regional Trial Court Branch 271 Judge Paz Esperanza Cortes issued a release order for her after her camp completed all the necessary documentation in the morning.

Topacio said her client became emotional when her family came to fetch her for her official release. He added that Cornejo would definitely stay in the Philippines and finish her trial, emphasizing that proving her innocence has become her priority now.

Earlier media reports said the court had issued the release order for Cornejo before noon, but Topacio said that document was “an order for (Cornejo) to be brought (before the court).”

Topacio said the release order for his client was issued “just now. Around 3 p.m. Just in time for Angelus.”

Cornejo, who was picked up by her family from Camp Crame where she was detained, and who arrived at the Taguig Hall of Justice past 1 p.m., refused to talk to the media when she was ushered out of the building past 3 p.m.

She was smiling as she walked past the cameramen and reporters, and immediately boarded a vehicle.

Topacio said she, her family and he were set to go to the Criminal Investigation and Detection Group in Camp Crame, Quezon City for Cornejo’s “final processing.”

“That’s her last stop,” Topacio told the Philippine Daily Inquirer, adding Cornejo would have to undergo a medical checkup there.

In the ambush interview with reporters, Topacio had to answer questions about why it took two days for Cornejo to be temporarily released from detention, while her co-accused, Cedric Lee and Simeon Raz, who were also allowed to post bail, had an easier time at it.

The two were detained in Camp Bagong Diwa also in Taguig before they posted a cash bond of P500,000 each early this week.

“Because first of all, (Lee and Raz) are just across … Because you know, the payment (of the recommended bail) is in Pasig. At least with (Lee and Raz), they’re just here going around (andito lang sila paikot ikot). Us, (we have to go to) Pasig, Taguig, Crame. That’s our circuit. It’s kind of far, and it’s traffic pa,” he said, adding it also took time for the money to be raised.

He said in the two days Cornejo had to remain in detention since the court allowed her to post bail, his client was “mostly jubilant.”

“Because at least you could already see the light at the end of the tunnel,” he said.

Florencia Cornejo, who helped in securing her granddaughter’s release order, said she did “not feel any hatred” for her (Cornejo’s) critics.

“They have seen naman what the truth is and (Cornejo was granted) temporary freedom. Let them think about that,” she said.

Topacio said his client was “very very happy” that her family was with her to share “their very first victory” with her.

He said when Cornejo was picked up by her family from Camp Crame to be brought to court, she was “very emotional.”

“She has been gathering strength from the support of her family,” he said.

According to Topacio, Cornejo had no plans to leave the country, because she saw her case as “her priority.”

He said she was not required to attend Friday’s hearing on the motion for inhibition filed by Navarro’s camp against Cortes.

“We haven’t received a notice (about the motion for reconsideration filed by Navarro’s camp on the granting of bail to Lee, Cornejo and Raz). Just (the notice) on the (motion for) inhibition,” he said, adding Cornejo’s temporary release “is just the first step…”

“There is still a long and arduous fight ahead,” he added.