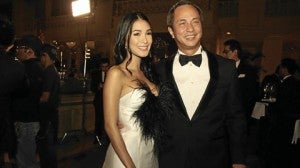 Heart Evangelista has been missing from the boob tube for the past five months after her planned soap opera with Dingdong Dantes and another series with Geoff Eigenmann fizzled out.

Does she feel that this was a fallout from her much-hyped feud with fellow GMA 7 talent Marian Rivera?

“I hope not,” she said. “That would be unfair. That issue shouldn’t be handled that way.”

GMA 7 big boss Annette Gozon-Abrogar told Inquirer Entertainment, though, that Heart’s next big soap opera is in the “preproduction stage.”

In the meantime, Heart said she was looking forward to her “unexpected” vacation and her coming trip to the United States (to spend time alone) and Australia (for a GMA Pinoy TV event).

Last time she left the country, for Brazil, she was with boyfriend Daniel Matsunaga. This time, she’s flying on her own.

“It’s like I’m going soul-searching,” she said. “I want to contemplate stuff. Is this really what I want to do? I’m building myself up for major decisions.”

Is she ready to throw in the towel after the incessant intrigues of the past few months?

Her recent surprise appearance at the Star Magic Ball sent intrigue-mongers on overdrive again. Is she raring to return to her old network, ABS-CBN?

“I don’t want it to come across as if I was being pirated,” she explained. “Star Magic doesn’t pirate talents.”

She said she was touched to receive the invitation from her old mentors, Johnny Manahan and Mariole Alberto.

“I grew up with them. Mr. M is like my second dad. I felt at home there. They really made me feel welcome. At the door, (network big boss) Mr. Gabby Lopez greeted me: ‘You’re all grown-up,’” she recalled.

In a lot of ways, she admitted, “I felt like a prodigal daughter coming home.”

She wishes that her decision to attend the party won’t upset her GMA 7 bosses.

“I hope they would understand,” she said. “I am who I am because of Mr. M and ABS-CBN.”

She went solo and didn’t invite Daniel as escort, “because I didn’t want to drag him into the controversy.”

It could get complicated, she explained, because “he still has a show (‘Futbolilits’) with GMA 7 and I want our work concerns to be separated from our personal relationship.”