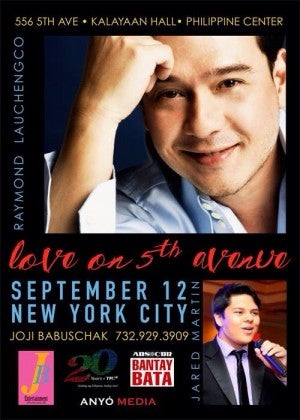 NEW YORK CITY, New York—Recording and singing star Raymond Lauchengco will be performing during a one-night concert, “Love on 5th Avenue” on September 12, at Kalayaan Hall in the Philippine Center, with a special guest performance by Jared Martin.

Performing since he was 12, Lauchengco became one of the most idolized teens in the ‘80s after his break in a lead role in the movie “Bagets.”

At 18, Lauchengco released, his first album that was self entitled, “Raymond.” Since then he has recorded seven additional albums. His latest release, “The Promise,” under Viva Records, was released to in May. One title in the album earned him an Aliw Award for Best Concert-Collaboration.

Over the years he has distinguished himself as a concert and recording artist, some of his most popular songs being “I Need You Back,” “Shadow of Time,” “Farewell,” “Saan Darating Ang Umaga” and “So It’s You.”

The audience can expect Lauchengco to take them through a night filled with memories and music as he performs his best romantic love songs from decades past. The show will highlight renowned Broadway hits, songs from West End, Original Pilipino Music and much more.

“This event will interest Fil-Ams because Raymond has performed all over the world and this will be his first time in New York with his special guest Jared Martin, an award winning musician and entertainer,” said producer Joji Babuschak of JB Productions. “Also portions of the proceeds will benefit the abused children of Bantay Bata.”

With Lauchengco will be special guest singer, Jared Martin. Jared is also a professional vocalist and entertainer. Earlier this year he graduated from the University of Arts. He has performed on national television and the radio.

Martin’s career began at an early age, and his unique talent led him to achieve the lead role in “The King and I.” He has performed with the likes of Martin Nievera, Bert Nievera, Lea Salonga, Gabby Concepcion and Lani Misalucha.

Martin said, “I feel quite honored to have the opportunity to sing with such a talented, and wonderful musician. I definitely want to take in as much as I can from the experience since it is only one night! I’m looking forward to it because the audience can expect a great night of love songs, both old and new. It will be a fun night for everyone!”

To learn more about Raymond Lauchengco, visit raymondlauchengco.com and Raymond’s official Facebook page at facebook.com/officialraymondlauchengco. For sponsorship or tickets for the “Love on 5th Avenue” performance, direct inquiries to Joji Babuschak of JB Entertainment Productions. Contact 732.929.3909. or 908.783.2680.