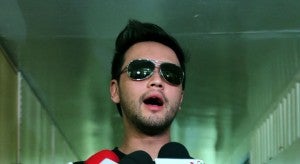 Singer and TV host Billy Crawford apologizes for his drunk behavior for the incident at the Taguig Police station 7 which led to his detention at the Taguig City police headquarters. INQUIRER PHOTO/RAFFY LERMA

MANILA, Philippines – Charges were filed on Monday against ABS-CBN television host Billy Crawford, a day after he was arrested for going berserk in a police station at Taguig City while he was drunk and breaking one of its sliding glass doors.

Crawford also posted a total bail bond of P6,000 for two counts of disobedience to an agent of a person in authority and one count of malicious mischief, and was released from detention late afternoon Monday.

Senior Superintendent Arthur Asis, the Taguig police chief, said that they filed charges of malicious mischief, alarm and scandal, disobedience to an agent of person in authority and direct assault against the Showtime host in the city prosecutor’s office around 9:30 a.m.

However, only the charges of malicious mischief and disobedience to an agent of a person in authority were approved by the prosecutor’s office.

Regarding Crawford’s bail bond, Asis said Crawford’s release order was issued by the court around 5:30 p.m.

In an interview with reporters at the Taguig police headquarters before noon on Monday, Nadia Montenegro, Crawford’s friend, denied reports that the TV host had a fight with someone before he went to the Police Community Precinct (PCP) 7 at Bonifacio Global City and demanded that he be placed under arrest.

“Billy did not fight with anyone in The Fort. He knew that he could not handle himself anymore because he was too intoxicated. Let’s make that clear. He said his enemy was himself,” Montenegro said, adding that having been raised in the United States, Crawford had been taught to go to the police for help whenever he was in trouble.

“This is not quite common here in our country. People find it weird,” she said.

Inspector Jonathan Aribe, PCP 7 commander, told reporters that the TV host barged into the police station around 4:30 a.m. on Sunday and told the two policewomen that he wanted to be placed under arrest.

At that time, Crawford was clearly drunk, Aribe said, adding that the former repeatedly banged his body against one of the station’s sliding glass doors, breaking it. When the policewomen tried to restrain him, the more he resisted, leading to a minor tussle.

Interviewed afterward by reporters, he said that he knew that he was drunk and he went to the police station because he needed to be in a “controlled environment” to avoid making a fool of himself.

Montenegro initially said that the Showtime host would no longer show up at the Taguig court to post bail but Chief Inspector Benny Basilio, head of the city’s investigation unit, later said the court had required the actor’s appearance.

Colleen Garcia, Crawford’s girlfriend who accompanied the actor to the police headquarters on Monday, went out shortly before 4 p.m. She did not give interviews to the media.

A few minutes later, Crawford was rushed out of the police headquarters so that he could make his appearance in court and post bail.

When asked by a reporter why Garcia was there, he replied: “She’s helping me out through the whole process.”

He added that he was relying on the support of his friends and family to cope with the situation.