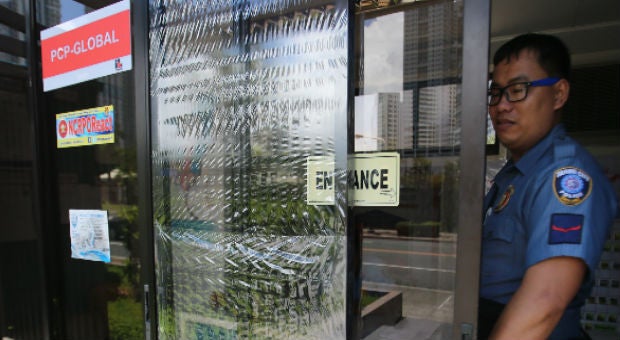 The Taguig Police station 7 where singer and TV host Billy Crawford destroyed one of the sliding glass doors after being in the influence of alcohol which led to his detention at the Taguig City police headquarters. INQUIRER PHOTO/RAFFY LERMA

MANILA, Philippines — Television host and singer Billy Joe Crawford on Sunday apologized for his actions after being jailed for breaking a glass door in police precinct 7 in Taguig City and also admitted that he was under the influence of alcohol when the incident happened.

In a radio interview , Crawford maintained  that he did not hurt any police officer.

“It was my fault but I did not hurt anyone. I did not push anyone. I only hit the glass [door],” Crawford said in a mix of English and Filipino.

The “It’s Showtime” host said he surrendered himself to the police in order to be “controlled” and  to be in a “controlled environment.”

“To be honest with you, I don’t see anything wrong with what I did. It was actually my fault for being aggressive.  Good thing it didn’t happen in a bar, it didn’t happen anywhere else. It happened  in a precinct. It’s because I knew for a fact that I need to be controlled or maybe in a controlled environment. So as I said, I really apologize to the officers if I said anything derogatory or anything else,” Crawford added.

Asked on what triggered his agression, he said that “he was just really exhausted” and “stressed out.”

“It’s an aggression . I’m just really exhausted , stressed out in certain situations. You know we try the best we are. We’re not perfect. Ibig sabihin ng “ayaw kong makasakit”  is I’m getting all the aggression and my anger is out,” Crawford said.

He also said that he was with a group of friends including his girlfriend, Coleen Garcia,  before he turned  himself in to police custody.

Crawford also apologized to the police officers who were affected by his deed.

He also apologized to his fans.